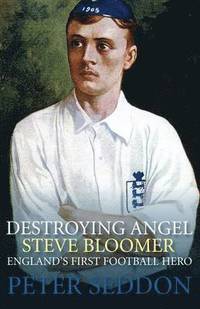 av Peter J Seddon
Häftad Engelska, 2013-09-01
109
Köp
Spara som favorit
Skickas inom 10-15 vardagar.
Fri frakt inom Sverige över 159 kr för privatpersoner.
What was it that made Steve Bloomer, the 'Destroying Angel' so special? A remarkable goalscoring record and a supreme ability count for much, but so do an enigmatic personality and incident-packed life that has never been fully explored - until now. In this marvellously entertaining story of his life, we accompany Bloomer on his dramatic rise from tough Black Country beginnings in 1874 to goalscoring feats straight out of Boy's Own Paper. His famous playing career shares the stage with remarkable episodes in Bloomer's life never before fully researched, including his sorrow and bravery through four years in a German prison camp, and his first tentative steps into the pioneering world of coaching in Germany. Holland and Spain, where his triumphant managerial spell brought glory to 'the Accrington Stanley of Spanish football', not to mention a novel use for olive oil. Then there are the twilight days as a scout, respected pundit and honorary old un at the Baseball Ground. Steve Bloomer died in 1938 but 60 years later, at their new Pride Park Stadium, Derby County ran out to the unique anthem Steve Bloomer's Watching. Over a century since he made his debut, his name is still the most famous in the club's history.
Visa hela texten

Peter Seddon was born in Derby in 1956 and was educated at Derby School and Leicester University, where he gained an Honours Degree in history. He first watched Derby County at the age of eight and has followed their ups and downs ever since as a season ticket holder. A member of the Association of Sports Historians and Football Statisticians, his interest in football extends to its very early days and his award-winning Football Compendium, published in 1995, reflects his specialist knowledge of the history and literature of the game. He is a keen all-round sportsman, still plays football regularly and lives in Derby.