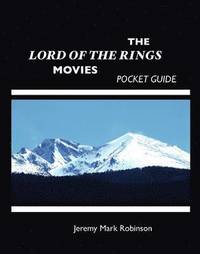 The Lord of the Rings Movies

av Jeremy Mark Robinson
Häftad Engelska, 2010-11-01
229
Köp
Spara som favorit
Skickas inom 10-15 vardagar.
Fri frakt inom Sverige för privatpersoner.
Finns även som
Visa alla 1 format & utgåvor
THE LORD OF THE RINGS MOVIES: POCKET GUIDE A pocket guide to the Hollywood adaptions of J.R.R. Tolkien's fantasy epic The Lord of the Rings, released in 2001, 2002 and 2003. The book tells you everything you need to know about these very popular films, from writing the script through casting and financing, to shooting and performances, to visual effects, editing and theatrical distribution.

The pocket guide includes discussions of every single scene in the three movies, including the Special Extended Editions (including some key individual shots). There are sections on the all of the important differences between The Lord of the Ring book and the movies (including numerous details), as well a chapter exploring the additions and the omissions. Looks at behind the scenes stories, and also the critical response to the movies.

There are chapters on the visual effects, on the casting and key personnel of the movies, on the studio and the financing of the films, on the music and sound, and the marketing and release of the movies in 2001-2003 (including the home entertainment releases on DVD and video). There is also a chapter on the critical response to the movies.

There is also an appendix on other adaptions of J.R.R. Tolkien's books.

It's amazing for me to see my work treated with such passion and respect. There is nothing resembling it in the U.S. in relation to my work.

Andrea Dworkin (on Andrea Dworkin) This model monograph - it is an exemplary job, and I'm very proud that he has accorded me a couple of mentions... The subject matter of his book is beautifully organised and dead on beam.