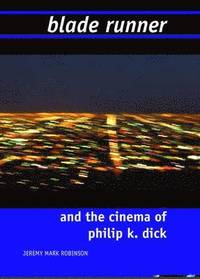 Blade Runner and the Cinema of Philip K. Dick

av Jeremy Mark Robinson
Häftad Engelska, 2012-02-01
229
Köp
Spara som favorit
Skickas inom 10-15 vardagar.
Fri frakt inom Sverige för privatpersoner.
Finns även som
Visa alla 1 format & utgåvor
BLADE RUNNER AND THE CINEMA OF PHILIP K. DICK BY JEREMY MARK ROBINSON This book is about the films made from the fiction of Philip K. Dick, which include the classic movie Blade Runner, the Arnold Schwarzenegger actioner Total Recall, Minority Report, directed by Steven Spielberg, and 2007's Next. A thorough exploration of Blade Runner forms the core of the book, looking at the conception, production, themes and influence of the 1982 Warner Brothers film in every detail.

Philip Kindred Dick (1928-1982) was a key figure in 20th century science fiction, famous for embracing drugs and the counter-culture in his work. Dick's fiction includes The Man In the High Castle, Flow My Tears, The Policeman Said, A Scanner Darkly, The Game Players of Titan, Clan of the Alphane Moon, The Three Stigmata of Palmer Eldritch, Do Androids Dream of Electric Sheep?, Valis, The Divine Invasion, Martian Time-Slip, The Minority Report, and We Can Remember It For You Wholesale. Dick's themes included perception and reality, drugs, state control, global capitalism, surveillance, and paranoia.

Four films are explored here: Blade Runner, Total Recall, Minority Report and A Scanner Darkly (in a chapter by Thomas Christie). The other films based on Phil Dick's fiction, which are discussed in the final chapter, include Confessions d'un Barjo (a French movie based on Confessions of a Crap Artist), a Canadian film, Screamers, based on Dick's Second Variety story, Paycheck, directed by John Woo, Next (Lee Tamahori, 2007), based on The Golden Man, and Impostor (Gary Fleder, 2002).

The more recent cycle of Philip Kindred Dick movies began with Minority Report and Impostor in 2002 - Paycheck and Next followed in 2003 and 2007, and The Owl In Daylight, a possible film about Dick, and Radio Free Alemuth (2008). A sequel to Screamers was released in 2009, again shooting in Canada, with Peter Weller starring.

Fully illustrated, with a newly revised text for this edition. Bibliography, filmography and notes. ISBN 971861713568. www.crmoon.com FROM THE FOREWORD

In this comprehensive book, Jeremy Robinson explores the themes of Blade Runner with his usual insight and knowledge of visual and narrative film. Robinson presents a critical and objective outside viewpoint. He tries to be balanced, and to offer criticism as well as praise. It is ultimately important to note that he is writing about art, not the artist, and he admires Ridley Scott as much as I do.

Blade Runner has been analyzed, debated, dissected and discussed extensively over the last 25 years and I hope you find Jeremy Robinson's exploration into Ridley Scott's seminal sci-fi film noir masterpiece to be innovative and glowing with new ideas that stimulate your imagination and jump start your synapses.

Bloggat om Blade Runner and the Cinema of Philip K. ...