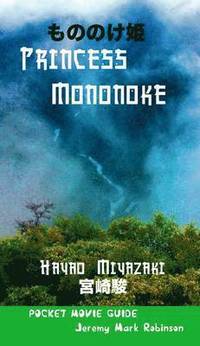 av Jeremy Mark Robinson
Häftad Engelska, 2012-12-01
159
Köp
Spara som favorit
Skickas inom 10-15 vardagar.
Fri frakt inom Sverige över 159 kr för privatpersoner.
Finns även som
Visa alla 2 format & utgåvor
PRINCESS MONONOKE: HAYAO MIYAZAKI: POCKET MOVIE GUIDE This book focusses on Hayao Miyazaki's 1997 masterpiece Princess Mononoke. Princess Mononoke is a work of genius. It is a masterpiece. It is one of the most staggeringly incredible films you will ever see. By any standards you want to apply, the level of imagination and artistry and detail and insight and energy in this movie is simply astounding. As well as being a visionary piece, with the highest quality animation achievable, with fascinating characters, stupendous action, brilliant set-pieces, and with some deeply poetic episodes, Princess Mononoke is also a thematically rich movie. There are many levels to this wonderful picture. This new study of Hayao Miyazaki's Princess Monoke includes sections on Miyazaki's influences . his contemporaries and colleagues (including Akira Kurosawa) . his characters . his movies' relation to Western animation (including the Walt Disney Company) . and his themes and motifs. The book also explores Japanese animation, its production and style, some classics of anime, and digital animation.

Born on January 5, 1941 in Tokyo, Hayao Miyazaki is known as the 'Japanese Disney', a filmmaker as revered - and as popular - as Walt Disney or Steven Spielberg. Miyazaki, in short, is a true phenomenon in contemporary animation and in world cinema. Miyazaki's movies include Princess Mononoke, Spirited Away, Howl's Moving Castle, Laputa: Castle In the Sky and My Neighbor Totoro.

What Hayao Miyazaki's films do is to bring you completely into a fantasy world that is instantly recognizable and familiar. It's as if these fantasy realms have always existed - very much like J.R.R. Tolkien's Middle-earth or Ursula Le Guin's Earthsea (both influences on Miyazaki).

www.crmoon.comAUTHOR'S NOTE: I hope this book offers readers some new insights into Princess Monoke and the movies of the incredible filmmaker Hayao Miyazaki, so they can go back and enjoy the movie all over again. The book also includes technical info on animation, a chapter on the animation industry in Japan, and comparisons between Miyazaki's films and those in the West, including Walt Disney's work.
Visa hela texten