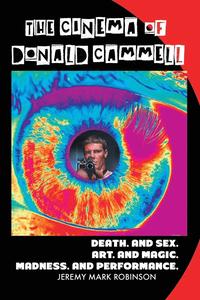 The Cinema of Donald Cammell

Death. and Sex. Art. and Madness. Magic. and Performance

av Jeremy Mark Robinson
Häftad Engelska, 2015-11-22
229
Köp
Spara som favorit
Skickas inom 10-15 vardagar.
Fri frakt inom Sverige för privatpersoner.
Finns även som
Visa alla 1 format & utgåvor
THE CINEMA OF DONALD CAMMELL DEATH. AND SEX. ART. AND MADNESS. MAGIC. AND PERFORMANCE. by Jeremy Mark Robinson Although Donald Cammell's credits consist of a very few titles as a film director - Performance (1970), Demon Seed (1977), White of the Eye (1987) and Wild Side (1995) - he remains one of the most fascinating of British filmmakers. This book explores all of Donald Cammell's key movies, his themes and symbols, his cinematic style and direction, and his use of music and visuals. As a writer and director, Donald Cammell directed Performance (1970), a masterpiece combining the British gangster genre with the world of rock 'n' roll, starring Mick Jagger, James Fox and Anita Pallenberg; Demon Seed (1977), a sci-fi chiller starring Julie Christie; White of the Eye (1987), a bizarre American thriller; Wild Side (1995), a kind of erotic thriller; and the unfinished The Argument (1999). Cammell's scripts which were made into films include the above five movies, plus Duffy (Robert Parrish, 1968), Tilt (Rudy Durand, 1978) and R.P.M. (Ian Sharp, 1997). Otherwise, Donald Cammell's film career is a story of scripts that didn't get made, a series of setbacks, false starts, possible then abandoned projects (but that's a familiar story with most filmmakers - every filmmaker has a drawer full of unmade projects). Performance, Demon Seed, White of the Eye and Wild Side form the centre of this new book. There is also chapter on Cammell's unmade productions; his other movie projects; a biography; and sections on his influences and collaborators (including Kenneth Anger, Mick Jagger, the Rolling Stones, Aleister Crowley, and Jean-Luc Godard). A number of aspects strike one immediately when considering the four feature films that Donald Cammell directed: (1) they all have contemporary settings (with Demon Seed in the some futuristic period); (2) three were set in North America, and made in America (and Performance would've ended up in Gotham if Cammell had had his way); (3) they all feature sex and violence; (4) they were made with American money by American studios (Warners; MGM; Nu Image), except for White of the Eye (though the money was still American); and they all have elements of thrillers and film noir (they can all be classed as thrillers). Appendices include films and artists linked to Donald Cammell, including: Nic Roeg; The Man Who Fell To Earth; Fitzcarraldo; Syd Barrett; and Sympathy For the Devil/ One Plus One. Fully illustrated (including images from Cammell's movies, from Roeg's films, of the Rolling Stones, and from the 1960s period of Performance). Bibliography and notes. ISBN 9781861715227. 368 pages. www.crmoon.com
Visa hela texten