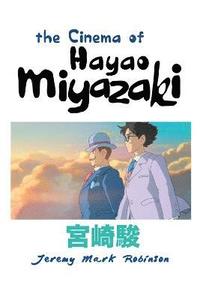 The Cinema of Hayao Miyazaki

av Jeremy Mark Robinson
Häftad Engelska, 2016-08-02
299
Köp
Spara som favorit
Skickas inom 10-15 vardagar.
Fri frakt inom Sverige för privatpersoner.
Finns även som
Visa alla 4 format & utgåvor
THE CINEMA OF HAYAO MIYAZAKI By Jeremy Mark Robinson Born on January 5, 1941 in Tokyo, Hayao Miyazaki is known as the 'Japanese Disney', a filmmaker as revered - and as popular - as Walt Disney or Steven Spielberg. Miyazaki, in short, is a true phenomenon in contemporary animation and in world cinema. Hayao Miyazaki's movies include Princess Mononoke, Spirited Away, Howl's Moving Castle, Laputa: Castle In the Sky and My Neighbor Totoro. Hayao Miyazaki may be the most talented fantasy filmmaker of his generation: not even the finest filmmakers of Hollywood can rival his films when it comes to creating fantasy worlds, and fantastical characters and events. Miyazaki has millions of fans around the world, not least among fellow animators and filmmakers, for whom he is a genius. What Hayao Miyazaki's films do is to bring you completely into a fantasy world that is instantly recognizable and familiar. It's as if these fantasy realms have always existed - very much like J.R.R. Tolkien's Middle-earth or Ursula Le Guin's Earthsea (both influences on Miyazaki). The visionary and magical elements are fused with the domestic and familial and social elements, so that it seems completely ordinary and believable that, say, flying machines soar overhead which have flapping wings like an insect. To write one hit animation movie is amazing, to write eleven is remarkable. To write and direct one spectacular animated picture is very impressive, to write and direct eleven features is unheard-of in the world of contemporary commercial animation. This new study of Hayao Miyazaki considers all of his films and TV shows (and his manga work). It also includes chapters on Studio Ghibli ? on fellow director Isao Takahata ? Miyazaki's influences ? his contemporaries and colleagues ? his characters ? his movies' relation to Western animation (including the Walt Disney Company) ? his unmade films ? and his themes and motifs. The Cinema of Hayao Miyazaki also explores Japanese animation, its production and style, some classics of anime, and digital animation. Includes quotes by Miyazaki; fans on Miyazaki; and resources. REVISED AND UPDATED, WITH NEW ILLUSTRATIONS. The second edition has been completely updated and revised. There is a new chapter on The Wind Rises, and Ghibli's latest films, including The Tale of Princess Kaguya. Fully illustrated. With filmography, bibliography and notes. 664 pages. ISBN 9781861715531. Also available in hardcover. www.crmoon.com AUTHOR'S NOTE: I hope this book offers readers some new insights into the films of the incredible filmmaker Hayao Miyazaki, so they can go back and enjoy them all over again. I have looked at all of the key research for this book, which was begun years ago. I have focussed mainly on the movies themselves, exploring each one in detail. The book also includes technical info on animation, a chapter on the animation industry in Japan, and comparisons between Miyazaki's films and those in the West, including Walt Disney's work. I have also included chapters on the output of Studio Ghibli, and also Isao Takahata, Miyazaki's colleague.
Visa hela texten