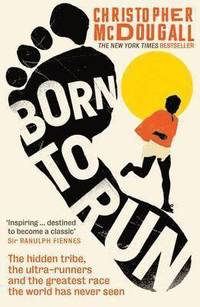 The hidden tribe, the ultra-runners, and the greatest race the world has never seen

av Christopher McDougall
(6 röster)  |  Läs 2 recensioner
Häftad Engelska, 2010-04-15
119
Köp
Spara som favorit
Finns även som
Visa alla 1 format & utgåvor
At the heart of Born to Run lies a mysterious tribe of Mexican Indians, the Tarahumara, who live quietly in canyons and are reputed to be the best distance runners in the world; in 1993, one of them, aged 57, came first in a prestigious 100-mile race wearing a toga and sandals. A small group of the world's top ultra-runners (and the awe-inspiring author) make the treacherous journey into the canyons to try to learn the tribe's secrets and then take them on over a course 50 miles long. With incredible energy and smart observation, McDougall tells this story while asking what the secrets are to being an incredible runner. Travelling to labs at Harvard, Nike, and elsewhere, he comes across an incredible cast of characters, including the woman who recently broke the world record for 100 miles and for her encore ran a 2:50 marathon in a bikini, pausing to down a beer at the 20 mile mark.
Visa hela texten

Quite simply the best book you'll ever read about running - it's brilliant, and brilliantly life-affirming. -- Lloyd Bradley, author of The Rough Guide to Running A classic ... in ultrarunners McDougall uncovers a tribe worthy of the pioneering drifters that fired the American spirit, and in McDougall ultrarunners have found their own Kerouac or Krakauer. -- Tim Butcher, author of Blood River Reaches the state of bliss that runners very occasionally experience in the midst of an endless run. -- Simon Kuper * FT * Fascinating stuff, particularly for anyone who's ever been frustrated by the apparently shoddy mechanics of their own running body. -- Victoria Moore * Daily Mail * A sensation ... a rollicking tale well told -- Rick Broadbent * The Times * Part how-to manual, part scientific treatise but throughout a ripping yarn, this book will inspire everyone who reads it to think on their feet. -- Simon Redfern * Independent on Sunday * If you're a runner, you probably won't reach the end of the first chapter without bolting for the door to get some miles behind you. * Leeds Guide * [A] major voice of a new movement. -- Bernard Goldberg * HBO * Good books about running are rare - Haruki Murakami's What I Talk About When I Talk About Running is a meditative jog compared to this blistering endurance tester - but this ranks among the strongest. -- Julian Fleming * Sunday Business Post * Utterly unputdownable ... a fascinating peek into the lives of the publicity-shy Tarahumara and the collection of misfits who populate the world of ultra-running ... the final race in Mexico's Copper Canyon will have you turning pages faster than Usain Bolt can run for a bus. -- Natasha Young * Wanderlust * If you're a runner, you'll love it. It's about how far we can go spiritually and physically. -- Kate Hudson, Actress * Elle * Inspiring stuff -- Amy Lawrenson * Elle * I read Born to Run last year and it affected me profoundly. I thought, "F*** it. I'm gonna run a marathon." -- Flea (of Red Hot Chili Peppers) * Runner's World * Loved this book ... completely wonderful. It will inspire you whether you're already a runner or not. -- Lauren Laverne * Twitter *

Christopher McDougall is a former war correspondent for the Associated Press and author of the international bestseller Born to Run. He does his own running among the Amish farms around his home in rural Pennsylvania.