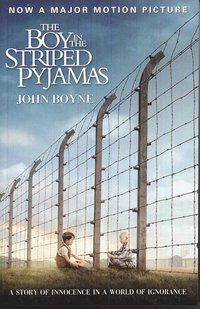 The Boy in the Striped Pyjamas

av John Boyne
(3 röster)  |  Läs 1 recension
Häftad Engelska, 2008-09-11
12-15 år
89
Köp
Spara som favorit
Kan tyvärr inte längre levereras innan julafton.
Finns även som
Visa alla 8 format & utgåvor
Lines may divide us, but hope will unite us . . . Nine-year-old Bruno knows nothing of the Final Solution and the Holocaust. He is oblivious to the appalling cruelties being inflicted on the people of Europe by his country. All he knows is that he has been moved from a comfortable home in Berlin to a house in a desolate area where there is nothing to do and no one to play with. Until he meets Shmuel, a boy who lives a strange parallel existence on the other side of the adjoining wire fence and who, like the other people there, wears a uniform of striped pyjamas. Bruno's friendship with Shmuel will take him from innocence to revelation. And in exploring what he is unwittingly a part of, he will inevitably become subsumed by the terrible process.
Visa hela texten

An account of a dreadful episode, short on actual horror but packed with overtones that remain in the imagination. Plainly and sometimes archly written, it stays just ahead of its readers before delivering its killer punch in the final pages -- Nick Tucker * Independent * A small wonder of a book. Bruno's education is conducted slowly, through a series of fleeting social encounters rather than by plunging him into a nightmare landscape * Guardian * An extraordinary tale of friendship and the horrors of war seen thorugh the eyes of two young boys, it's stirring stuff. Raw literary talent at its best. More please! * Irish Independent * Quite impossible to put down, this is the rare kind of book that doesn't leave your head for days. Word of mouth should be strong and this has the potential to cross over to an adult audience. A unique and captivating novel, which I believe deserves huge success -- Becky Stadwick * The Bookseller * Brilliantly written, superbly conceived novel, ending with words as bleakly ambiguous as any I have ever read. Boyne's ability to lead us on with crystal clear prose so that we unthinkingly fall into the elephant trap reminds me irresistably of another Irishman - Jonathan Swift -- Dennis Hamley * The School Librarian *

John Boyne is the author of thirteen novels for adults, six for younger readers and a collection of short stories. His 2006 novel The Boy in the Striped Pyjamas has sold more than 11 million copies worldwide and has been adapted for cinema, theatre, ballet and opera. His many international bestsellers include The Heart's Invisible Furies and A Ladder to the Sky. He has won three Irish Book Awards, along with a host of other international literary prizes. His novels are published in over fifty languages.