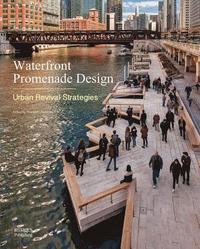 av Andersson Thorbjorn
Inbunden Engelska, 2017-09-01
369
Köp
Spara som favorit
Skickas inom 7-10 vardagar.
Fri frakt inom Sverige för privatpersoner.
Waterfronts, the unique places where land and water meet, are a finite resource, embodying the special history and character of each city. The last decades have witnessed profound changes along abandoned or underused waterfronts, bringing in new pedestrian areas, new business opportunities, and new vitality. This trend is accelerating in cities around the globe. Waterfront Promenade Design seeks to answer to the question of how we can go about rejuvenating waterfronts by promoting good landscape planning and design. In total, 34 great waterfront design practices were selected from all over the world, each with their own unique way of solving the problems posed by their allocated sites, social conditions, and public policies. All resulted in more vibrant, accessible, resilient, and culturally rich public spaces, attuned to these needs. In order to strengthen the waterfront's coherence and connection, this book pays special attention to the design of traversable space along waterfronts, ensuring that promenades are maintained as pedestrian and cyclists-friendly zones. Based on in-depth analysis, this book provides useful design and planning approaches for professionals, decision-makers, and scholars.
Visa hela texten

Thorbjorn Andersson has practiced landscape architecture since 1981, having studied landscape architecture, architecture, and art history in Sweden and the United States. He is most known for his work in the planning and design of public spaces in the city. A selection of these projects have received awards and international attention. Andersson has been author or co-author of numerous essays and several books, including Svensk Tradgardskonst under fyrahundra ar (Four Hunderd Years of Swedish Garden Art). He also was the founder and editor of the journal Utblick Landskap. An elected member of the Royal Swedish Academy of Fine Arts he is currently professor at the Swedish University of Agricultural Sciences, in addition to his continuing practice. His teaching experience also includes visiting professorships at a number of international schools, including Harvard University and Cambridge. For his contribution to the field of landscape architecture, Andersson was awarded the Prince Eugene Medal from His Majesty, the King of Sweden in 2009.