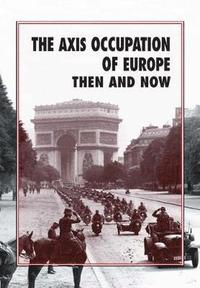 The Axis Occupation of Europe Then and Now

av Winston G Ramsey
Inbunden Engelska, 2018-06-15
399
Köp
Spara som favorit
Skickas inom 5-8 vardagar.
Fri frakt inom Sverige för privatpersoner.
Winston and Gail Ramsey This book focuses on the systems used by the Axis powers for the governance of the countries that they occupied during the Second World War. It would be easy to assume that the administration of each country was carried out on a somewhat ad hoc basis, but streams of detailed orders and decrees were enacted to cover all aspects of everyday life . . . from finance to crime. Dr Raphael Lemkin was a Polish emigre and the person who coined the term `genocide' during his study of international law concerning crimes against humanity which he began in 1933 - the year that the Nazis assumed power in Germany. Dr Lemkin's much-acclaimed work Axis Rule in Occupied Europe was published in 1944 and extracts from it now form the framework on which we have built this `then and now' coverage of the occupation of Czechoslovakia, Memel, Albania, Danzig, Poland, Denmark, Norway, Luxembourg, the Netherlands, Belgium, France, Monaco, the Channel Islands, Greece, Yugoslavia, the Baltic states, the Soviet Union, Romania, Italy and Hungary. Individual chapters also cover the most serious crimes committed by the occupier: the destruction of whole villages in Czechoslovakia, France, the Netherlands and Greece, and the genocidal acts carried out in Italy, Greece and Belgium, although nothing can equal the wholesale slaughter enacted in the Balkans and the USSR. It has been estimated that the Axis occupation of Europe cost between 20 and 25 million civilian lives, apart from the deaths of at least 16 million servicemen and women who paid the ultimate price in trying to put Europe back together again. It is a debt that can never be repaid. SIZE 12"x81/2" 368 PAGES OVER 1,000 ILLUSTRATIONS ISBN 9 781870 067935 GBP39.95
Visa hela texten

Bloggat om The Axis Occupation of Europe Then and Now