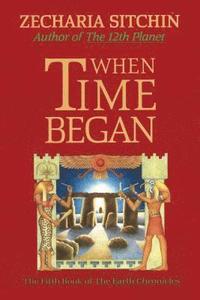 The Fifth Book of the Earth Chronicles

av Zecharia Sitchin
(1 röst)
Inbunden Engelska, 1994-03-01
249
Köp
Spara som favorit
Skickas inom 5-8 vardagar.
Fri frakt inom Sverige för privatpersoner.
Night and day, month after month, year after year, our ancestors dutifully recorded the passage of time on clay tablets, watching the heavens from stage towers and pyramids and from megalithic monuments whose incredible size and precise architecture boggle the mind. . . . Who were the builders of these mysterious structures? What was their purpose? Whose signature is indelibly written on these timeless stones, and who was the Divine Architect? Why was Stonehenge and its likes built by ancient civilizations at the very same time--4,100 years ago? What is their message for our time? With these questions in mind, Zecharia Sitchin, renowned researcher of past ages, takes us on a journey through the records of time in this, the fifth book of his "Earth Chronicles" series. Drawing deeply on Sumerian and Egyptian writings, millenia-old artifacts, and sacred architecture ranging from ancient Mesopotamia to pre-Columbian civilizations in the Americas, this bestselling scholar provides astounding insights into the origins of the calendar, astronomy, and astrology. He takes readers to the climax circa 2100 b.c. when Marduk, the Babylonian national god, attained supremacy on Earth and proclaimed the New Age of Aries--after which society, religion, science, and the status of women were never the same.
Visa hela texten

"Sitchin's book is nothing less than a sensation. . . . a sober and erudite work, profound in its implications and obviously the outcome of painstaking, perceptive research into the texts of past ages. As such, it is sincere and convincing." --Worcester Evening News

Zecharia Sitchin (1920-2010) was born in Russia and grew up in Palestine, where he acquired a profound knowledge of modern and ancient Hebrew, other Semitic and European languages, the Old Testament, and the history and archaeology of the Near East. A graduate of the University of London with a degree in economic history, he worked as a journalist and editor for many years prior to undertaking his life's work--"The Earth Chronicles." <br>One of the few scholars able to read the clay tablets and interpret ancient Sumerian and Akkadian, Sitchin based "The Earth Chronicles" series on the texts and pictorial evidence recorded by the ancient civilizations of the Near East. His books have been widely translated, reprinted in paperback editions, converted to Braille for the blind, and featured on radio and television programs.