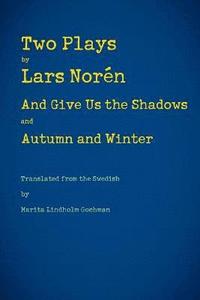 And Give Us the Shadows and Autumn and Winter

av Lars Noren
Häftad Engelska, 2013-04-30
189
Köp
Spara som favorit
Skickas inom 10-15 vardagar.
Fri frakt inom Sverige för privatpersoner.
Lars Noren, generally considered Sweden's greatest playwright since August Strindberg, had his first play produced in 1973 at the Royal Dramatic Theater in Stockholm, when he was about 30. His breakthrough came in 1982 with Night Is Mother to the Day. Noren has since written about 75 plays that combine humor with powerful emotional impact and feature his dynamic search for new forms of expression. His work has been translated into several languages and regularly performed in Nordic and European countries. Two Plays: And Give Us the Shadows and Autumn and Winter is the first book to present Noren's plays in English. And Give Us the Shadows is a fictional work based on Eugene O'Neill's life, set in Marblehead, MA, on O'Neill's 61st birthday, when he and his wife, Carlotta, are expecting a visit from his two sons. Autumn and Winter centers on parents and their two grownup daughters who reveal family secrets during one of their regular monthly dinners. .
Visa hela texten

Lars Noren is a Swedish playwright, novelist and poet. He is considered Sweden's most prominent contemporary playwright. Translator Marita Lindholm Gochman was born in Sweden and came to America in 1964, where she has had a rich theatrical career. In 1985, she translated her first Noren play into English, The Last Supper, and since then has worked with him on 25 of his plays--making her Noren's foremost English language translator. Since 1987 Ms. Gochman has served as a board member of Circle in the Square, The International Theatre Institute, and The Signature Theatre.