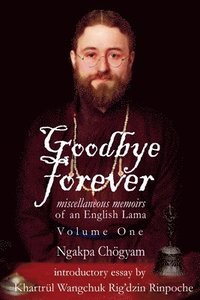 av Ngakpa Chogyam
Häftad Engelska, 2020-05-15
289
Köp
Spara som favorit
Skickas inom 10-15 vardagar.
Fri frakt inom Sverige för privatpersoner.
A three-year-old boy has lucid dreams and visions - but no linear idea of what they mean. He tests his visions against the mysteries of: the Vikings; Norse legends; poetry; painting; Chicago Blues; girlfriends as inspirational other-worldly beings; and, through delving the vivid panorama of the 1960s' hippie epoch: a strange brew - but one from which a transformational perspective is distilled.

At eight years of age, Vajrayana Buddhism replaces Norse legends, on finding picture books on Tibetan Art in the school library. Drlma and Chenrzigs replace Frig and Thor, his curious imagination captured by the poetry of their vibrant imagery.

He learns silent-sitting meditation, goes to Farnham Art School and thence to the Himalayas. There he finds Kyabj Dd'jom Rinpoche, who gives him transmission into the world of vision in which he discovers the nature of reality. At the age of nineteen, he looks to the future and wonders how he will fulfil the predictions that have been made for his life.
Visa hela texten