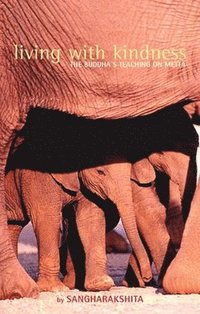 The Buddha's Teaching on Metta

av Bikshu Sangharakshita
Häftad Engelska, 2004-09-01
149
Köp
Spara som favorit
Growing the seed to happiness Kindness is one of the most basic qualities we can possess, and one of the most powerful. In Buddhism it is called metta - an opening of the heart to all that we meet. Any friendly feeling contains the kernel of metta. It is a seed that is waiting to be developed, right here amidst the conditions of our daily life. Living with Kindness is a pithy commentary on the Buddha's teaching of metta in the Karaniya metta sutta. In it, Sangharakshita, a teacher of Buddhism for over fifty years, shows us how to cultivate many of the facets of kindness in ordinary, everyday life. Outlining the nurturing conditions the seed of kindness needs to grow, he encourages us to follow the path that leads to a warm and expansive heart - and beyond. And with_that heart, we can be happier and more fulfilled in ourselves and empathise with the joys and sufferings of all living beings. An excellent companion to Living with Awareness, also by Sangharakshita, which is a commentary on the Satipattana Sutta (Living with Awareness, ISBN 1899579389)
Visa hela texten

"Just as a mother would protect her only child at the risk of her own life... let thoughts of boundless love pervade the whole world from the Karaniya Metta Sutta"

Sangharakshita was born Dennis Lingwood in South London in 1925. Largely self-education, he developed an interest in the cultures and philosophies of Asia early on and realized that he was a Buddhist at the age of sixteen. After 20 years in India, following he returned to England and established the Friends of the Western Buddhist Order (1967) and the Western Buddhist Order (1968). A prolific author, his titles include The Bodhisattva Ideal, A Survey of Buddhism, The Three Jewels and a series of memoirs.