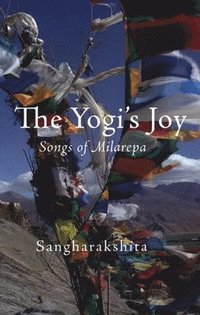 av Ven Sangharakshita
Häftad Engelska, 2006-01-01
138
Köp
Spara som favorit
Milarepa was a yogi and Tibetan Buddhist mystic of great learning and turbulent worldly experience. His "hundred thousand songs" are read and loved by many, but examinations of them are few. Here, three of these songs are explored by Sangharakshita, a well-respected Buddhist teacher and author, in such a way that the wisdom and teachings Milarepa drew out in his songs are made relevant to life for us today. Known by some as both the Robin Hood and Shakespeare of Tibetan Buddhism, Milarepa and his songs offer a magical and thoughtful way into the wisdom and compassion sought on the Buddhist path. The Yogi's Joy reveals how these ancient teachings can ring true for us--here and now.
Visa hela texten

Sangharakshita was born Dennis Lingwood in South London in 1925. Largely self-educated, he developed an interest in the cultures and philosophies of Asia early on and realised that he was a Buddhist at the age of 16. The Second World War took him as a conscript to India, where he stayed on to become the Buddhist monk Sangharakshita. After studying for some years under leading teachers from the major Buddhist traditions, he went on to teach and write extensively. He also played a key part in the revival of Buddhism in India, particularly through his work among followers of Dr BR Ambedkar. After 20 years in India, he returned to England to establish the Friends of the Western Buddhist Order in 1967, and the Western Buddhist Order in 1968. A translator between Asia and the West, the traditional world and the modern, and between principle and practice, Sangharakshita's depth of experience and clear thinking have been appreciated throughout the world. He has always particularly emphasised the decisive significance of commitment in the spiritual life, the paramount value of spiritual friendship and community, the link between religion and art, and the need for a 'new society' supportive of spiritual aspirations and ideals. Sangharakshita recently handed on most of his responsibilities to his senior disciples in the Order. From his base in Birmingham, he is now focusing on personal contact with people and on his writing.