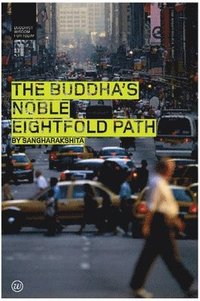 av Bikshu Sangharakshita
Häftad Engelska, 2007-06-01
129
Köp
Spara som favorit
Kan levereras innan julafton!
The teaching of the Buddha's Noble eightfold Path is explored in relation to every aspect of life - a treasury of wisdom and practical guidance. The reader is taken deeper than most introductions while always remaining practical, inspiring and accessible. This title is first in a new series: "Buddhist Wisdom for Today".
Visa hela texten

sangharakshita was born Denis Lingwood in South London in 1925.After twenty years as a Buddhist monk in India, he returned to England to establish the Western Buddhist Order in 1967. A translator between East and West, the traditional world and the modern, principles and practice, Sangharakshita's clear thinking have been appreciated throughout the world. He now lives in Birmingham , where he focuses on his writing.