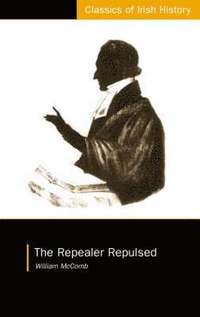 av William McComb, Patrick Maume
Häftad Engelska, 2003-07-01
409
Köp
Spara som favorit
Specialorder (osäker tillgång). Skickas inom 11-20 vardagar.
Fri frakt inom Sverige för privatpersoner.
"The Repealer Repulsed" is an account of Daniel O'Connell's visit to Belfast in January 1840. Henry Cooke, the celebrated Presbyterian leader, publicly challenged O'Connell to debate Repeal during the visit. O'Connell refused to debate Cooke, partly because of his unwillingness to elevate his rival's stature but also for fear of violence. In contrast to O'Connell's usual triumphant rallies, the Belfast visit produced extensive rioting and the planned ceremonial welcomes for O'Connell in border towns were cancelled for fear of disorder. O'Connell himself travelled in disguise. Written and published in haste to discredit O'Connell, this book has been described as a foundation text of Ulster unionism. It contains one of the earliest statements of the economic case for Ulster unionism and provides valuable insight into the construction of political Protestantism.
Visa hela texten

"Maume's introduction ... does everything an introduction should do-introducing the players, establishing context, explaining consequences-and it does it all superbly. This is not only a classic of Irish history but a necessary primer for any understanding of sectarian politics in the north, whatever the vintage. It is a marvellous document ... If the other volumes in the series are as well chosen and as well edited as these two ... Classics of Irish History will be one of the most important publishing ventures of the last twenty years." Irish Literary Supplement Spring 2005 "University College Dublin Press has now published over thirty 'Classics of Irish History'. These contemporary accounts by well known personalities of historical events and attitudes have an immediacy that conventional histories do not have. Introductions by modern historians provide additional historical background and, with hindsight, objectivity." Books Ireland Nov 2007 "Scholars of nineteenth-century Irish and Irish-American politics should reacquaint themselves with these classics, part of a long running and immensely useful series from University College Dublin Press. Patrick Maume has edited and written the introductions for no less than nine of the books in this series, lending them his breadth of knowledge and keen analysis that have made him one of the most learned and intellectually generous young scholars in the field." Irish Literary Supplement Fall 2008