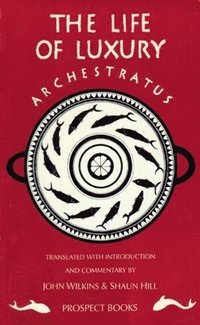 Fragments from the Life of Luxury

av John Wilkins, Shaun Hill
Häftad Engelska, 2011-05-09
159
Köp
Spara som favorit
Skickas inom 7-10 vardagar.
Fri frakt inom Sverige över 159 kr för privatpersoner.
The big fact about Archestratus is that the fragments that survive constitute the earliest written culinary text to come down to us from the classical world (pedants might argue that the Babylonian and Egyptian materials are earlier but they in no way resemble a book.)This remarkable and almost unique work was written in the 4th century BC by the poet Archestratus, from Gela, a Greek colony in Sicily. The complete text has long since vanished but these fragments or quotations enshrined in a much later book by Athenaeus have come down to us. Archestratus' description of the foods, particularly fish, available, how they should be cooked and where found in the best condition is precious testimony of the strength of the Mediterranean culinary tradition. His style of cooking can best be called the nouvelle cuisine of the ancient world, and contrasts piquantly with the elaborate and strongly flavoured dishes of Apicius, the much later and perhaps coarser Roman author.The Greek verse has been translated into prose by John Wilkins and Shaun Hill, who set it in context in their introduction, and pursue byways of ancient Greek cookery in their commentary. Archestratus' poem has been the subject of a major new edition by Olsen & Sens. However, its price is prohibitive and the text is much concerned with linguistic and editorial matters, thus making it much less accessible to people interested in the history of food rather than the development of Greek prosody.
Visa hela texten

John Wilkins is Professor of Classics at Exeter University. He has worked on Euripides, Greek comedy, Athenaeus and Galen. He has a particular interest in food studies and was the joint editor both Athenaeus and his World and Food in Antiquity.Shaun Hill is a chef by profession though he studied Classics at university. He has been much feted for his cooking, receiving a galaxy of Michelin stars, and is currently at the stoves at The Walnut Tree Inn near Abergavenny.