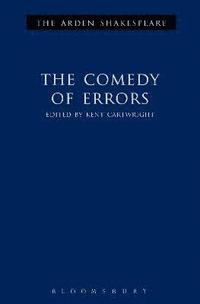 The Comedy of Errors

av William Shakespeare, Prof Kent Cartwright
Inbunden Engelska, 2016-12-15
1219
Köp
Spara som favorit
Finns även som
Visa alla 3 format & utgåvor
Shakespeare's dextrous comedy of two twin masters and two twin servants continually mistaken for one another is both farce and more than farce. The Comedy of Errors examines the interplay between personal and commercial relationships, and the breakdown of social order that follows the disruption of identity. As well as detailed on-page commentary notes, this new edition has a long, illustrated introduction exploring the play's performance and crtitical history, as well as its place in the comic tradition from Classical to modern times.
Visa hela texten

The detailed scholarship of Cartwright's thematic introduction suits the Bard's most adaptable play, and unearths the textual gems for any critical reader, enthusiastic performer, or budding newcomer. * Sixteenth Century Journal * Cartwright's Introduction and notes make readers appreciate the richness, complexity and depth of a comedy that has often been brushed off as a mechanical "imitation" of Plautus's farcical Menaechmi. * Sederi Yearbook * An unapologetic and refreshingly enthusiastic celebration of a play whose disparagement in the eighteenth and nineteenth centuries has had a lingering effect despite the more recent revival of its fortunes. While Cartwright gestures towards the play's triumphant theatrical resurgence, he is most interested in its linguistic and structural complexities, unpacked in a rich introduction. * Shakespeare Survey *

Kent Cartwright is Professor of Medieval and Renaissance Literature at the University of Maryland, USA.