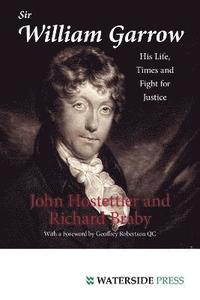 His Life, Times and Fight for Justice

av John Hostettler, Richard Braby
Häftad Engelska, 2010-12-17
339
Köp
Spara som favorit
Finns även som
Visa alla 1 format & utgåvor
Sir William Garrow was born in Middlesex in 1760 and called to the Bar in 1783. He was the dominant figure at the Old Bailey from 1783 to 1793, later becoming an MP, Solicitor-General, Attorney-General and finally a judge and lawmaker within the Common Law Tradition. Garrow is now in the public-eye for daring to challenge entrenched legal ways and means. His 'gifts to the world' include altering the relationship between judge and jury (the former had until then dominated over the latter in criminal trials), helping to forge the presumption of innocence, rules of evidence and ensuring a general right to put forward a defence using a trained lawyer. He gave new meaning to the trial advocate's forensic art of cross-examination, later diverting skills honed as a radical to help the Crown when it was faced with alleged plots, treason and sedition. This is a generous work in which well-known legal historian and biographer John Hostettler and family story-teller Richard Braby (a descendant of Garrow) combine their skills and experience to produce a gem of a book. The lost story of Sir William Garrow and its rediscovery will prove enlightening for professional and general readers alike and provide an invaluable 'missing-link' for legal and social historians. It is also a remarkable work of genealogical research which will register strongly with family historians.
Visa hela texten

'A Law book yes, but boring no, a delight to read': Internet Law Book Reviews. 'Without the pioneering work of William Garrow, the legal system would be stuck in the Middle Ages': Radio Times 'Garrow can truely be said to have revolutionised the practice of criminal law': Geoffrey Robertson QC (from the Foreword). 'A blockbuster of a book': Phillip Taylor MBE of Richmond Green Chambers.'[Hostettler and Braby's] definitive biography ... is informative, entertaining and a really good read, and in the process rescues Garrow from undeserved obscurity': Littlehampton Gazette

John Hostettler was a solicitor in London for thirty-five years as well as undertaking political and civil liberties cases in Nigeria, Germany and Aden. He played a lead role in the abolition of flogging in British colonial prisons and is a former magistrate. His earlier books embrace several biographical and historical works, including about the lives of Thomas Wakley, Sir James Fitzjames Stephen, Thomas Erskine, Sir Edward Carson, Sir Edward Coke, Lord Halsbury and Sir Matthew Hale. His books for Waterside Press include The Criminal Jury Old and New; Fighting for Justice: The History and Origins of Adversary Trial; Hanging in the Balance: A History of the Abolition of Capital Punishment in Britain (with Dr Brian P. Block); and, most recently, A History of Criminal Justice in England and Wales. Richard Braby is a direct descendent of Sir William Garrow and as an avocation is a family story teller. He collects and preserves the stories of his family's ancestors. Now retired, his career was conducting educational research during the emergence of the personal computer. Dr. Braby is an author of over 50 technical publications, and was a long time member of the Human Factors Society. He is a graduate of Columbia University, New York City where he specialized in the design of instructional materials. Geoffrey Robertson QC defended at the Old Bailey in such notable trials as that of Oz magazine, Peter Hain, John Stonehouse, the ABC Official Secrets case, Gay News and the Matrix Churchill 'Iraqgate' trial, as well as in IRA and other terrorist cases. He developed a pro bono practice defending at the Privy Council men condemned to death in Commonwealth courts. He is the founding head of Doughty Street Chambers, a Recorder and a bencher of the Middle Temple. He served as the First President of the UN Special Court for Sierra Leone and is a member of the UN Justice Council. His books include The Justice Game - a memoir of some of his notable trials - and The Tyrranicide Brief - an account of how Cromwell's lawyers brought the King to justice.