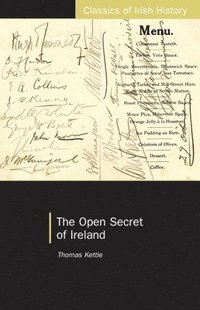 The Open Secret of Ireland

"The Open Secret of Ireland", published in 1912, consists of articles primarily focused on Home Rule, offering both historical and contemporary analyses. The collection includes three articles focused on Unionism, particularly on Ulster Unionism, and Kettle's description of 'The Hallucination of Ulster' provides a fascinating insight into nationalist ideas about the fragility of the unionist bloc and the unreasonableness of their cause. This revealing and intriguing collection offers many insights into the motivations of the old Home Rule generation, convinced that their day had come and utterly unaware of the radical course Irish politics were to take in the next ten years. This edition includes an original introduction by John Redmond. It contains a new introduction by Senia Paseta.
Visa hela texten

"University College Dublin Press has now published over thirty 'Classics of Irish History'. These contemporary accounts by well known personalities of historical events and attitudes have an immediacy that conventional histories do not have. Introductions by modern historians provide additional historical background and, with hindsight, objectivity." Books Ireland Nov 2007 "While Kettle is perhaps not so well known these days despite his bust in Stephen's Green, the re-issue of this book is to be lauded in that it allows us a glimpse of a political view which was to be one of the victims of 1916 and what followed ... For anyone who is intrigued by the political and intellectual arguments for Home Rule in the Edwardian period this is an essential resource." Irish Democrat 2007 "Scholars of nineteenth-century Irish and Irish-American politics should reacquaint themselves with these classics, part of a long running and immensely useful series from University College Dublin Press." Irish Literary Supplement Fall 2008

Thomas Michael (Tom) Kettle (1880-1916) was born in Artane, Co. Dublin and qualified as a lawyer. He became a Tyrone MP for the Irish Parliamentary Party, and a writer and academic at University College Dublin. He was widely acknowledged as the leading constitutional nationalist of his generation. He became involved with the nationalist Irish Volunteers, although he supported the British war effort and died at the Somme. Senia Paseta is a Fellow and Tutor in St Hugh's College, Oxford, and the author of Before the Revolution, National, Social Change and Ireland's Catholic Elite, 1879-1922 and A Very Short Introduction to Ireland