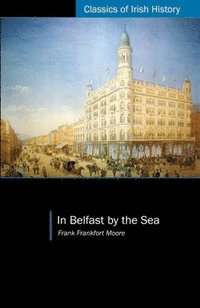 In Belfast by the Sea

av Frank Frankfort Moore, Patrick Maume
Häftad Engelska, 2007-09-01
279
Bevaka
Spara som favorit
Tillfälligt slut – klicka "Bevaka" för att få ett mejl så fort boken går att köpa igen.
"In Belfast by the Sea" originally appeared as a series of 61 articles in the "Belfast Telegraph", 1923-4. They comprise Moore's recollections of Victorian Belfast and Bangor between his childhood in the 1860s and his departure for London in 1892. Highpoints are a tour of the city centre in which he recollects the shops and public buildings as they were in his youth, his reminiscences of his education at the Royal Belfast Academical Institution, and his description of the city's musical and theatrical life. His descriptions of the development of the city's water and transport networks include an account of the first public appearance of the Dunlop inflatable tyre and travelling conditions on the early railway services.
Visa hela texten

"University College Dublin Press has now published over thirty 'Classics of Irish History'. These contemporary accounts by well known personalities of historical events and attitudes have an immediacy that conventional histories do not have. Introductions by modern historians provide additional historical background and, with hindsight, objectivity." Books Ireland Nov 2007 "Scholars of nineteenth-century Irish and Irish-American politics should reacquaint themselves with these classics, part of a long running and immensely useful series from University College Dublin Press. Patrick Maume has edited and written the introductions for no less than nine of the books in this series, lending them his breadth of knowledge and keen analysis that have made him one of the most learned and intellectually generous young scholars in the field." Irish Literary Supplement Fall 2008

Bloggat om In Belfast by the Sea

Frank Frankfort Moore (1855-31) was a journalist and prolific popular novelist who rose to be deputy editor of the Belfast Newsletter before leaving for London to become a professional writer. Patrick Maume is a researcher with the Dictionary of Irish Biography