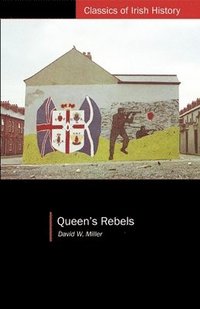 av David W Miller
Häftad Engelska, 2007-09-01
279
Köp
Spara som favorit
Specialorder (osäker tillgång). Skickas inom 11-20 vardagar.
Fri frakt inom Sverige för privatpersoner.
"Queen's Rebels" is a seminal book, described as 'the classic discussion of Protestant loyalism' and 'the most original study of Ulster loyalist ideology'. It is an interpretive essay on the history of the Ulster Protestant community from the seventeenth-century plantations to the mid 1970s. A central concern of the essay is the seemingly contradictory pattern of 'conditional loyalty' on the part of twentieth-century Ulster Protestants. The book was written in the mid-1970s during the some the most violent years of 'the Troubles' when the author spent a year in Belfast, and it has been long unavailable. The new introduction by John Bew places "Queen's Rebels" in the context of the literature on the Northern Ireland and brings the story up to date.
Visa hela texten

"The experiences in Ulster have attracted the attention of many historians, but few have written about the problem with as much insight as D. W. Miller in his classic essay on the Queen's Rebels, which has just been re-issued with an excellent introduction by a star of the up-and-coming generation of historians, John Bew. Miller's original work was so influential because he perfectly captured the contradictions inherent to Ulster Unionism." Verbal Magazine Oct 2007 "University College Dublin Press has now published over thirty 'Classics of Irish History'. These contemporary accounts by well known personalities of historical events and attitudes have an immediacy that conventional histories do not have. Introductions by modern historians provide additional historical background and, with hindsight, objectivity." Books Ireland Nov 2007 "Scholars of nineteenth-century Irish and Irish-American politics should reacquaint themselves with these classics, part of a long running and immensely useful series from University College Dublin Press." Irish Literary Supplement Fall 2008