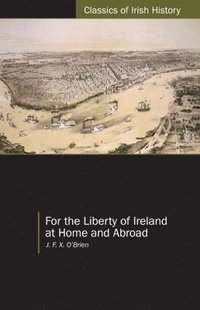 For the Liberty of Ireland, at Home and Abroad the Autobiography of J. F. X. O'Brien

av J F X O'Brien, Jennifer Regan-Lefebvre
Häftad Engelska, 2010-09-14
349
Bevaka
Spara som favorit
Tillfälligt slut – klicka "Bevaka" för att få ett mejl så fort boken går att köpa igen.
James Francis Xavier O'Brien is best known as a Fenian and member of the Irish Parliamentary Party, but his autobiography reveals an exciting life of bohemian travel before he entered nationalist politics. Born in Waterford, the young O'Brien studied in Paris, where he befriended artist James McNeill Whistler, left to join William Walker's military campaign in Nicaragua, then settled in the cosmopolitan city of New Orleans on the eve of the American Civil War. He describes in detail his return to Ireland, his leadership in the Fenian insurrection of 1867 and subsequent imprisonment, and his conversion to constitutional nationalism and election to Parliament. Written between 1895 and 1897, the autobiography offers a defence of O'Brien's political journey when competing factions were fighting for Irish nationalist hearts and minds. The autobiography is published here for the first time, edited and with a critical introduction by Jennifer Regan-Lefebvre.
Visa hela texten

'University College Dublin Press has now published over thirty 'Classics of Irish History'. These contemporary accounts by well known personalities of historical events and attitudes have an immediacy that conventional histories do not have. Introductions by modern historians provide additional historical background and, with hindsight, objectivity.' Books Ireland Nov 2007 'Scholars of nineteenth-century Irish and Irish-American politics should reacquaint themselves with these classics, part of a long running and immensely useful series from University College Dublin Press.' Irish Literary Supplement Fall 2008 'this is the autobiography of a Fenian and member of the Irish Parliamentary Party (1829?-1905). O'Brien's life seemed to follow a trajectory from wild and unconventional towards the respectable. He recounts how in his youth - he went to Paris and was part of the Bohemian set there. Later he joined American William Walker in his military adventure in Nicaragua and he settled for a time in New Orleans just before the American civil war. After that war he returned to Ireland, helped to organise the 1867 rising and then went on to become a Home Rule MP. All this is interesting enough but the story is also full of details of such as his encounter with a rocking chair, the dangers of mosquitoes, social life in antebellum New Orleans. O'Brien had no problem with slavery and this may make him unsympathetic to modern readers, but he was not unique in this and his book is a useful source on this period from many perspectives.' Books Ireland November 2010 'It is an entertaining and insightful read, especially into Fenianism, though at times the wisdom of hindsight is evident. It is here published for the first time and is introduced by Dr Jennifer Regan-Lefebvre, author of a biography of Webb. - UCD Press are to be congratulated on this series in general. The standard of editing and presentation are uniformly high. The inclusion of the hitherto unpublished works on the Fenian movement makes available valuable insights which will greatly assist students of the period. One looks forward to more such publications.' Books Ireland, May 2012

Bloggat om For the Liberty of Ireland, at Home and A...

J. F. X. O'Brien (1829?-1905) was a Fenian, imprisoned for his activities in 1867 but pardoned in 1869. He was a Home Rule MP and Treasurer of the Irish Parliamentary Party from 1885 until 1905. Jennifer Regan-Lefebvre is Lecturer in Modern History at the University of Exeter. She is the author of Cosmopolitan Nationalism in the Victorian Empire: Ireland, India and the Politics of Alfred Webb (2009) and articles on print and press history.

Introduction by Jennifer Regan-Lefebvre; For the Liberty of Ireland, at Home and Abroad: The Autobiography of J. F. X. O'Brien.