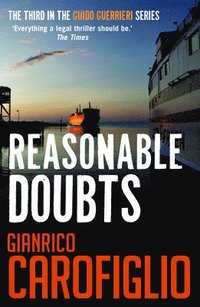 av Gianrico Carofiglio
Häftad Engelska, 2012-08-09
109
Köp
Spara som favorit
Skickas inom 7-10 vardagar.
Gratis frakt inom Sverige över 159 kr för privatpersoner.
Finns även som
Visa alla 1 format & utgåvor
Counsel for the defence Guido Guerrieri is asked to handle the appeal of Fabio Paolicelli, who has been sentenced to sixteen years for drug smuggling. The odds are stacked against the accused: not only the fact that he initially confessed to the crime but also his past as a neo-Fascist thug. It is only the intervention of Paolicelli's beautiful half-Japanese wife that finally overcomes Guerrieri's reluctance. Matters are further complicated when Guerrieri ends up in bed with her.
Visa hela texten

"The role of Guido Guerrieri is to take on impossible cases that have little chance of success. The lawyer accepts the case only because he's fallen in lust with the prisoner's wife; his efforts to prove his client's innocence bring him into dangerous conflict with Mafia interests. Everything a legal thriller should be." The Times "This book is hard-boiled and sun-dried in equal parts. Where Philip Marlowe would be knocking back bourbon and listening to the snap of fist on jaw, Guerrieri prefers Sicilian wine and Leonard Cohen. Guerrieri is romantically troubled and perpetually drawn into defending those he'd rather not. The local colour is complemented by snappy legal procedural writing which sends the reader tumbling through the clockwork of a tightly wound plot.' Financial Times "Carofiglio, until recently an anti-Mafia prosecutor in southern Italy, is particularly well-placed to write legal thrillers, and he does so with considerable brio, humour and skill. Guido Guerrieri is a lawyer who struggles with his own demons as much as with his stressful caseload - stressful because Guido is attracted to seemingly hopeless causes, and because it sometimes feels as though he's the only honest lawyer in Bari." Daily Mail

Gianrico Carofiglio now a member of the Senate in Italy was an anti-Mafia prosecutor in Bari, a port on the coast of Puglia. He has been involved with trials concerning corruption, organized crime and the traffic in human beings. He is a best-selling author of crime novels, literary fiction and most recently has authored a graphic novel illustrated by his brother.