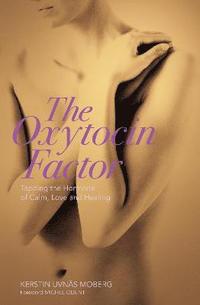 Tapping the Hormone of Calm, Love and Healing

av Kerstin Uvnas Moberg
Häftad Engelska, 2011-04-01
115
Köp
Spara som favorit
In recent years there have been exciting scientific discoveries about a hormone whose amazing role in the human body has long been neglected. Oxytocin is the powerful hormone involved in bonding, sex, and childbirth, as well as in relaxation and feelings of calm. It is the mirror image of the stress hormone adrenaline, which triggers the 'fight or flight' systems in the body. Much has been written about the latter, but the many-sided importance of oxytocin is at this point known only to those working in obstetrics and physiology and to some psychiatrists. The Oxytocin Factor is the first book to reveal the importance of the whole oxytocin system for a general audience. Both the new research findings and the potentially beneficial applications of this hormone in reducing anxiety states, stress, addictions, and problems of childbirth are fascinating and of great significance in all our lives.
Visa hela texten

Kerstin Uvnas Moberg, M.D., Ph.D., is recognised as a world authority on oxytocin. Her research takes place at the famed Karolinska Institute in Stockholm, and at the Swedish University of Agricultural Sciences in Uppsala, where she is Professor of Physiology. She is the author of more than 450 scientific papers and the books, She and He, The Oxytocin Factor, The Hormone of Closeness, Oxytocin: the Biological Guide to Motherhood, and co-author of Attachment to Pets. Dr. Uvnas Moberg lectures widely in Europe and the United States. Her work has been influential in a variety of fields, including physiology, women's health, obstetrics, psychology, animal husbandry, physical therapy, pediatrics and child development. She is a mother of four children, and she lives in Djursholm, Sweden. Michel Odent, MD, has been in charge of the surgical unit and the maternity unit at the Pithiviers state hospital (1962-1985) and is the founder of the Primal Health Research Centre (London). He is the author of the first article in the medical literature about the initiation of lactation during the hour following birth (1977), of the first article about the use of birthing pools (Lancet 1983), and of the first article applying the 'Gate Control Theory of Pain' to obstetrics (1975). See pubmed.com (Odent M). He created the Primal Health Research database (www.primalhealthresearch.com). He is the author of 16 books published in 24 languages. Michel Odent is Visiting Professor at the Odessa National Medical University and Doctor Honoris Causa of the University of Brasilia.