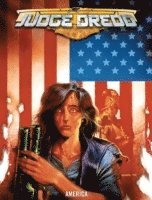 av John Wagner
Häftad Engelska, 2008-03-01
174
Köp
Spara som favorit
Finns även som
Visa alla 1 format & utgåvor
In Mega-City One, the Judges are the law, acting as judge, jury, and executioner. But how do the citizens really feel about a system where they are powerless? America Jara and Bennett Beeny grow up as best friends, living a fairly trouble-free life in a dangerous city...bar the odd encounter with a Judge. Time draws them apart, and when they are brought back together, Beeny is a successful singer and America has become involved with a terrorist organisation with the Judges in its sights! Written by John Wagner (A History of Violence) with art by Colin MacNeil (Judge Dredd: The Chief Judge's Man) this dark and complex tale is a true 2000 AD classic!
Visa hela texten

John Wagner is, to many fans, the very heart of 2000 AD. Involved from the earliest days of the Galaxy's Greatest Comic, he co-created Judge Dredd, as well as Strontium Dog, Robo-Hunter and a host of other 2000 AD mainstays, including the critically-acclaimed Button Man. Incredibly prolific throughout his career, and writing under a diversity of pen names -- often in concert with Alan Grant, with whom he devised and developed 2000 AD's sister comic, the Judge Dredd Megazine -- Wagner has worked extensively beyond the Thargian universe, originating and editing a number of British periodicals as well as writing many American standards, including Batman, The Punisher, Lobo and Star Wars bounty hunter Boba Fett. His Paradox Press graphic novel A History of Violence has recently been made into a film by David Cronenberg. Frazer Irving is without question one of 2000AD's brightest new stars. His distinctive art style, both on co-created strips like A Love Like Blood, Necronauts and Storming Heaven, as well as on Judge Dredd, Judge Death, Future Shocks, Terror Tales, Tharg the Mighty, The Scarlet Apocrypha and Sinister Dexter, have quickly brought him to the attention of the US industry. Irving recently completed both Fort: Prophet of the Unexplained for Dark Horse Comics and The Authority: Scorched Earth for DC/WildStorm.