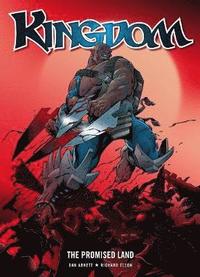 av Dan Abnett, Rich Elson
Häftad Engelska, 2008-12-04
299
Köp
Spara som favorit
Specialorder (osäker tillgång). Skickas inom 11-20 vardagar.
Fri frakt inom Sverige för privatpersoner.
Out into the wilderness they trek, led by the urgings from their masters, charged with keeping Them off of his lawn. The pack, led by Gene the Hackman, are strong, experienced soldiers - they don't know exactly what Them are, but they have their orders, and Them are to be scrapped at every opportunity. The Masters must be obeyed. But The Masters are not all they appear to be and when Gene the Hackman's pack scatter he will come face to face with a world shattering truth! Written by best-selling author Dan Abnett (Durham Red) with art by Richard Elson (Judge Dredd) this action-packed tale of earth's far future is not to be missed!
Visa hela texten

Dan Abnett is the co-creator of 2000 AD series Atavar, Badlands, Sancho Panzer and Sinister Dexter. He has also written Black Light, Downlode Tales, Durham Red, Flesh, Future Shocks, Judge Dredd, Pulp Sci-Fi, Roadkill, Rogue Trooper, The VCs, Vector 13 and Venus Bluegenes, as well as The Scarlet Apocrypha and Wardog for the Megazine. A prolific creator, Abnett has also written for Marvel, Dark Horse and DC Comics. He is the author of twenty novels for the Black Library, including the bestselling Gaunt's Ghosts series. His most recent work outside the Galaxy's Greatest Comic is DC's Legion and Superman, and Wildstorm's Mr Majestic. Dan Abnett was voted Best Writer Now at the 2003 National Comic Awards.