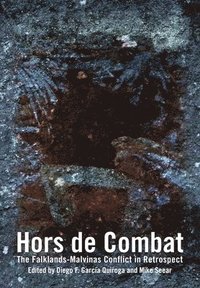 The Falklands-Malvinas Conflict in Retrospect

av Diego F Garcia Quiroga, Mike Seear
Häftad Engelska, 2009-08-01
149
Köp
Spara som favorit
Skickas inom 10-15 vardagar.
Gratis frakt inom Sverige över 159 kr för privatpersoner.
This is a revised and expanded version of the book first published in 2007. Hors de Combat brings together contributions from the University of Nottingham's 2006 International Colloquium, The Falklands-Malvinas Conflict Twenty-Five Years On. The initiative to hold such an historic event led to the coming together for the first time since the 1982 War of ex-combatants from both sides, in dialogue with specialist historians, media sociologists, lawyers, literary critics and psychiatrists, as well as with veterans of other wars. Their contributions, edited by Diego F. Garca Quiroga and Mike Seear, who themselves served in the War, are published here as a written record of what, for many, had been a unique moment of peace and reconciliation.
Visa hela texten