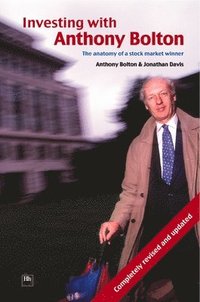 The Anatomy of a Stock Market Winner

av Jonathan Davis, Anthony Bolton
Häftad Engelska, 2006-11-01
159
Köp
Spara som favorit
Skickas inom 10-15 vardagar.
Fri frakt inom Sverige över 159 kr för privatpersoner.
Finns även som
Visa alla 1 format & utgåvor
Who is the most successful investment manager in Britain? Arguments could rage forever, but no professional would dispute that Anthony Bolton of Fidelity is among the very best. GBP1,000 invested in his Special Situations fund at its launch in 1979 was worth more than GBP125,000 twenty seven years later. No other mainstream UK fund manager has put together such a consistently impressive performance over such a long period. The 125-fold increase represents an average compound growth rate of more than 20 per cent per annum, or 7 per cent per annum greater than the FTSE All-Share Index over the same period. This track record of sustained outperformance stands comparison with that of the greatest American investment superstars such as Warren Buffett and Peter Lynch. For many years, until the fund was voluntarily split in 2006, Fidelity Special Situations was easily the largest and most popular fund in the UK. What are the secrets of Anthony Bolton's success? This important book, now fully revised and updated, takes an in-depth look at the way that Bolton goes about his business and analyses in detail the fund's outstanding performance.Anthony Bolton gives his own personal account of the history of the fund, explains why he believes his contrarian stockpicking methods have worked so well for so long and summarises the lessons he has learnt from his long and successful career. This book is required reading for anyone with a personal or professional interest in investment. It is a fully revised and updated second edition with 25 pages of new material and graphics. It is the only full-length book to analyse in detail the strategies and techniques used by the UK's number one professional investor. It offers detailed analysis of the performance of his funds and the lessons that investors can draw from its exceptional track record. It is written jointly by Anthony Bolton and one of the UK's best known financial authors, a leading authority on the fund management business.
Visa hela texten

Anthony Bolton left Cambridge University with a degree in engineering to start a career in the City. In 1979, aged 29, he was recruited by Fidelity, the American fund management group, as one of its first London-based investment managers, a move that proved to be the launch of a long and successful career as an investment manager. In surveys of professional investors, he is regularly voted the fund manager most respected by his peers. He will be retiring from full-time investment management at the end of 2007, while continuing to work part-time at Fidelity and spending more time on his charitable interests and his hobby, composing classical music. Anthony Bolton is married with three children and lives in Sussex. Jonathan Davis has been analysing and writing about financial markets for 25 years. His early career was spent as a business journalist on national newspapers, including The Sunday Telegraph, The Times and The Economist. He later set up his own specialist writing, consultancy and publishing business and has been writing a popular column about investment in The Independent since 1995 and is also a regular contributor to the Financial Times and Spectator . He is the author of three books, two on investment and one on the game of bridge, and the founder and chairman of Independent Investor LLP, which specialises in publishing high quality material on money and investment, including books, reports and a specialist newsletter. www.independent-investor.com.

CHAPTER ONE Daring to be different: Three decades as a contrarian investor By Anthony Bolton How it all began The Fidelity experience The Special Situations fund Ignoring the benchmark Drama in the markets The internet bubble The changing investment scene Broking and research The secret of picking stocks The size of the fund and its performance The corporate governance front Good and bad performance Largest holdings Something new: China Splitting the Special Situations fund Introducing Jorma Korhonen The future CHAPTER TWO The professional's professional: The man and his funds By Jonathan Davis An orderly mind Devoted to detail A chance beginning Developing a style Starting out at Fidelity One simple insight The shares he likes Casting the net wide Prospering in Europe Looking beyond the UK Where the ideas come from Using technical analysis Coping with setbacks The bull market and beyond Into the limelight: the ITV saga The battle intensifies Entering the home straight CHAPTER THREE Assessing Anthony Bolton?s performance: How good has it been: and why? By Jonathan Davis Performance analysis and context Fidelity Special Situations Performance over different periods Risk analysis Style analysis Performance of the European fund Summary and conclusions Interpreting the performance How others see it The qualities great investors need The scale of the achievement The importance of being a contrarian CHAPTER FOUR Implications for investors (1) The lessons I have learnt By Anthony Bolton (2) Finding the next Bolton By Jonathan Davis APPENDICES APPENDIX 1. Fidelity Special Situations: performance record APPENDIX 2. How fund analysts see Anthony Bolton (a) analysis by Alastair MacDougall, Head of Research, WM Company (b) Analysis by Lee Gardhouse, Fund of funds manager, Hargreaves Lansdown (c) Analyst report on Fidelity Special Values, Close Winterflood Securities (September 2004) (d) Standard & Poor's ratings report on Fidelity Special Situations (October 2004) APPENDIX 3. Anthony Bolton's 10 largest holdings on an annual basis APPENDIX 4. Fidelity's relationship with companies it invests in APPENDIX 5. An example of Fidelity's in-house research: William Hill (spring 2003) APPENDIX 6. Slides from Fidelity Special Values presentation: July 2006 APPENDIX 7. A lifetime of music: the eight records that Anthony Bolton would take to a desert island APPENDIX 8. Pages from the first Fidelity Special Situations report to unitholders (October 1980) Author's acknowledgements Index