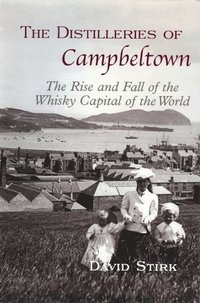 The Rise and Fall of the Whisky Capital of the World

av David Stirk
E-bok (EPUB - DRM), Engelska, 2013-02-28
65
Ladda ned
Spara som favorit
Laddas ned direkt
Läs i vår app för iPhone och iPad
Starting with the early origins of Campbeltown, David Stirk relates in The Distilleries of Campbeltown how the town grew from a small settlement into a Royal Burgh that depended on the herring fishery before whisky became the main trade in the town and its associated villages of Dalaruan and Dalintober. He shows how certain families such as the Colvilles, Armours and Mitchells were to be central to this trade for over a century. Ultimately the town's prosperity waned with the rise of the blending trade from the 1860s and the resultant preference for Speyside and Islay whiskies over their Campbeltown counterparts, the depression, prohibition in the USA and the post-WWI rationalisation orchestrated by the Distillers Company that took many distilleries out of production for ever. This decline is recorded by way of newspaper reports and correspondence between interested parties and is perhaps most poignantly represented by the suicide on 23 December 1930 of Duncan MacCallum, aged 83, once a leading distiller in the town, when he drowned himself in Crosshill Loch. Yet out of that dark past, something of a resurgence has gradually been made as Springbank and Glen Scotia have managed to keep going and now Glengyle is producing again. The result is that Campbeltown can now boast more working distilleries than exist in the entire Lowland producing area. This is the first proper in-depth look at the whisky industry in Campbeltown and it is accompanied with period colour OS maps showing the distillery locations in the mid-1860s along with numerous previously unpublished turn-of-the-century archive photographs of the town from the MacGrory collection.
Visa hela texten