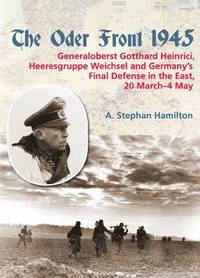 av A Stephan Hamilton
Inbunden Engelska, 2011-04-15
608
Bevaka
Spara som favorit
Tillfälligt slut – klicka "Bevaka" för att få ett mejl så fort boken går att köpa igen.
"Historical accuracy comes from exhaustive research and a deft writer's hand. Hamilton's The Oder Front, 1945 will prove to be the definitive work on the little-understood Nazi defense outside the gates of the German capital." - Doug McCabe, Curator of the Cornelius Ryan Collection of World War II Papers, Ohio University Nazi Germany's fall is regularly depicted through the dual images of Adolf Hitler directing the final battle for Berlin from his Fuhrerbunker, and the subsequent Soviet victory. This popular view, that Germany's last battle was a deliberate yet fatalistic defence of Berlin planned and conducted by Hitler, is now declared largely a historically inaccurate depiction. Germany's final battle began when Generaloberst Gotthard Heinrici took command of Heeresgruppe Weichsel on 20 March 1945. Heinrici, not Hitler, decided that there was only one strategic course left for Germany - hold the Soviets back along the Oder Front long enough to entice the Western Allies across the Elbe River. He knew two things, that the war was lost and what remained of Germany was destined for postwar Soviet occupation. He believed a protracted defence along the Oder Front would force the Western Allies into the postwar Soviet Zone of Occupation outlined in the Top Secret Allied Plan known as 'Eclipse', thereby sparing millions of Germans in the east the dismal fate of Soviet vengeance everyone knew was at hand. Berlin, Heinrici ordered, would not be defended. The capital of Germany would not become another 'Stalingrad'. In a companion volume to his successful and highly regarded study of the Soviet assault on the city of Berlin, Bloody Streets, author A. Stephan Hamilton describes the planning and execution of the defence of the Oder Front, using previously unpublished personal diaries, post-war interviews, Heeresgruppe Weichsel's war diary and daily command phone logs. In addition to a number of black and white photographs, this study features 64 pages of operational maps reproduced in full colour.
Visa hela texten

This is a fine study of the fighting on the Oder Front from a purely German perspective and of the central but little known figure who commanded the main German forces involved. The extensive use of primary sources, many of which were previously unpublished, is particularly impressive. * Military Modelcraft International * Stephan Hamilton's The Oder Front 1945 is partly based on previously unpublished material. This is the most extensive book in English in its field that provides a wealth of new information about the ... end of Nazi-Germany. The massive amount of first-hand accounts, memoirs, documents and war diaries shed light on many less-known operations conducted by the German ... military forces and the desperate fight for Berlin ... Through day-to-day reports and detailed maps, the reader gains a full overview of the battles and all units involved in the fighting. Masterfully written - Hamilton's way of writing the history of `the Downfall' is exemplary in every way and will leave few untouched! * Martin Mansson, author of Heinrich Himmler: A Photographic Chronicle of Hitler's Reichsfuhrer-SS (2004), and SS Panzer Aufklarungs Abteilung 11: The Swedish SS Platoon in the Battles for the Baltics, Pomerania and Berlin 1943-45 (with Herbert Poller and L * Historical accuracy comes from exhaustive research and a deft writer's hand. Hamilton's The Oder Front, 1945 will prove to be the definitive work on the little-understood Nazi defense outside the gates of the German capital. Not a "what if" missive, but a "what was hoped" and "what transpired" book, this is a detailed presentation of a desperate and forlorn struggle.This is a perfect companion to the author's Bloody Streets: The Soviet Assault on Berlin, April 1945. * Doug McCabe, Curator of the Cornelius Ryan Collection of World War II Papers, Ohio University * Hamilton, who availed himself of numerous primary sources such as German war diaries, contemporary accounts, situation maps and individual testimonies, has woven an enormous amount of information into an engrossing work that will interest both military historians and laymen. Aside from revealing Heinrici's true intentions for waging the final defensive battle in Europe, The Oder Front 1945 will also shed light on how shockingly far the military prowess of the Third Reich's armies had declined in the six years since the war began. A. Stephan Hamilton has written a great book that deserves a space on every military historian's bookshelf - the fact that the Battle for Berlin was a bloodbath is well known; what is not is how this tragedy was nearly avoided due to the efforts of one man, until now." - * Douglas E. Nash Sr., author of Hell's Gate: the Battle of the Cherkassy Pocket January-February 1944 (2002) and Victory Was Beyond Their Grasp: With the 272nd Volks-Grenadier Division from the Hurtgen Forest to the Heart of the Reich (2008), nominated for * The second book written by A. Stephan Hamilton, author of Bloody Streets: The Soviet Assault on Berlin, April 1945, is an excellent work which is a fine example of comprehensive and extensive research using primary resources to tell a story that is not well known, even among World War II scholars ... Hamilton has provided an excellent account of Heinrici's command of Heeresgruppe Weichsel and its operations during the last chaotic weeks of the Third Reich, as well as the immensely complex theater of military and civilian politics, local intrigues and personal power struggles that were the stage upon which this fascinating story unfolds. It is an exceptional story, masterfully researched and will be of great interest not only to Eastern Front enthusiasts, but scholars and students of all areas of study of World War II. * George M. Nipe, author of Decision in the Ukraine, Summer 1943 (1996), Last Victory in Russia: The SS Panzerkorps and Manstein's Kharkov Counteroffensive, Feb-March 1943 (2000), Platz der Leibstandarte: The SS Panzer