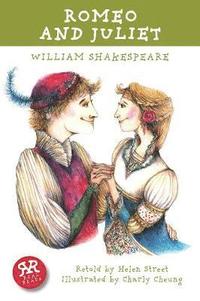 av William Shakespeare, Helen Street
Häftad Engelska, 2010-10-27
63
Köp
Spara som favorit
Skickas inom 5-8 vardagar.
Fri frakt inom Sverige för privatpersoner.
Finns även som
Visa alla 8 format & utgåvor
Romeo Montague thinks he's in love until he meets Juliet, the daughter of the Capulets. With her, he discovers what true love really feels like. But their two families are bitter rivals, and no one must know about their secret passion. When Romeo kills Juliet's cousin in a duel, their hope of happiness seems ended. Can Friar Laurence reconcile the two families, or will his plans bring even more tragedy?
Visa hela texten

William Shakespeare (c. 26 April 1564 - 23 April 1616) was an English playwright, renowned by many as the world's greatest writer in the English Language. Among his plays are "Romeo and Juliet", "Hamlet", "Macbeth" to name but a few. CHARLY CHEUNG was born and grew up in Singapore, and studied illustration at London University of the Arts at St Martins College. The Real Reads Shakespeare series is her first major commission. HELEN STREET grew up in Yorkshire in the north of England, and while living in York became involved in theatre and education, regularly working with children on productions of Shakespeare's best-known plays. She now divides her time between England and France, where she is renovating a semi-derelict farmhouse.