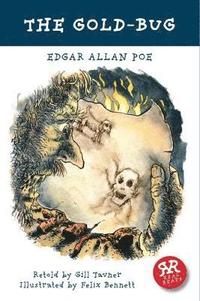 av Edgar Allan Poe, Gill Tavner
Häftad Engelska, 2015-07-01
85
Köp
Spara som favorit
Skickas inom 5-8 vardagar.
Fri frakt inom Sverige för privatpersoner.
'Dat gold bug was a vicious bug. Massa caught it first but it bit him. I think da bite has made Massa poorly. It has affected him in da head.' William Legrand has found a new type of bug, a golden bug, unusually heavy. His servant, Jupiter, is worried. Why is Legrand behaving so oddly? Has the bug's bite made him mad? When Legrand shows his friend a drawing of the gold bug, it looks more like a skull. What can this mean? The arrival of the gold bug leads the three men on an exciting adventure towards skeletons, a skull and a hunt for buried treasure. Should we believe Jupiter's superstitious fears, or is there a more logical explanation of events? If there is, can you, the reader, discover it? Real Reads are accessible texts designed to support the literacy development of primary and lower secondary age children while introducing them to the riches of our international literary heritage. Each book is a retelling of a work of great literature from one of the world's greatest cultures, fitted into a 64-page book, making classic stories, dramas and histories available to intelligent young readers as a bridge to the full texts, to language students wanting access to other cultures, and to adult readers who are unlikely ever to read the original versions.
Visa hela texten

Edgar Allan Poe (1809-1849) was an American author, poet, editor, and literary critic. Best known for his tales of mystery and the macabre, Poe was one of the earliest American practitioners of the short story, and is generally considered the inventor of the detective fiction genre. Felix Bennett grew up in Bradford in northern England, and cut short a maths and astronomy degree at University College, London, in order to spend more time as an illustrator. He trained at Bradford, then at the Camberwell School of Art. He now lives and works in London. Gill Tavner was an English Teacher and Head of Department before turning to writing when she had young children of her own. She has also taught English in South East Asia, worked as a personal trainer, been a management trainee in an insurance company, led treks in Africa, run her own business and painted fake tattoos on Blackpool Pleasure Beach. Perhaps it is this variety that makes her such a versatile writer.