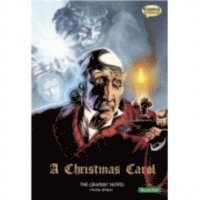 av Charles Dickens, Sean Michael Wilson
Häftad Engelska, 2008-10-13
12-15 år
119
Köp
Spara som favorit
Skickas inom 7-10 vardagar.
Fri frakt inom Sverige över 159 kr för privatpersoner.
This is the classic novel brought to life in full colour! 'I will honour Christmas in my heart, and try to keep it all the year. I will live in the Past, the Present, and the Future'. Classical Comics' first Dickens title is probably his best-loved story. Scrooge gets a rude awakening to how his life is, and how it should be. Full of Christmas Spirit(s), this is a book that you'll want to read all year round!
Visa hela texten

In 1951, Alastair Simm portrayed Ebenezer Scrooge in the classic black and white film and vocally reprised the role in a 1971 30 minute TV animated version. And there have been many other film and TV versions as well as comic adaptions over the decades. I know. I'm old. I've seen them.So,dusting the spiders webs from my head,I sat down to read Classical Comics version because I had seen some artwork back in May but I really wondered whether the full version would work -could the team add a little extra or a twist to make this better than any other version?No.And by A"noA" I mean that there was no need to add a little something extra or twist. This is the original Dickens story that gave us goosebumps when the teacher read it to us all those years ago in school.Mike Collins and David Roach [who I believe used to produce a Small Press mag titled A"HellfireA" back in the 1980s] will be familiar to comic fans. But could they adapt Mr. Dickens' classic?Of course they can! I could imagine receiving this as a Christmas present and sitting down to read it after dark. It's everything you expect from A Christmas Carol and fun to read and look at.Collins and Roach. Fantastic art. And the colourist,James Offredi does a really great job that adds so much more to the art -look at Marley's Ghost. Wonderful.Original Text is great but I think for younger readers it has to be Quick Text. I have to honestly say that I do,for some reason,look for faults or something not quite right. Why I have no idea. The logo A"Classical ComicsA" says it all.As with the other titles there are the list of characters the Dramatis personae,a lot of information on the author,how the book was drawn,lettered and even Teachers Resources notes. Perhaps the government ought to invest money by buying and distributing these books to schools to educate children but it seems they don't have that kind of money [only the kind for bailing out crooked bankers].Reading for fun or otherwise,these books,whether Henry V, MacBeth, Jane Eyre or A Christmas Carol,cannot be faulted and here's to the companies continued success!www.comicbitsonline.com