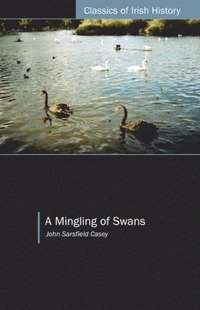 Casey was one of a group of Fenians arrested in 1865 in Cork and transported to Western Australia with other Fenians captured in the abortive 1867 Rising. "A Mingling of Swans" includes Casey's unpublished account of his experiences as a convict on roadwork parties, as well as correspondence by Casey and other Fenians, and some articles by Casey on his impressions of Western Australia which were published in Dublin separatist newspapers. Casey portrays with humour and determination the harsh conditions endured by Fenian prisoners.
Visa hela texten

'The book is very well presented with an excellent introduction and sections on the history of Western Australia; the Catholic Church in Western Australia; the Amnesty Movement; and biographical notes on the key figures ... This work on the incarceration of Fenians provides valuable information which will greatly assist students of the period.' Ian Chambers, Australasian Journal of Irish Studies, 2014 'University College Dublin Press has now published over thirty 'Classics of Irish History'. These contemporary accounts by well known personalities of historical events and attitudes have an immediacy that conventional histories do not have. Introductions by modern historians provide additional historical background and, with hindsight, objectivity.' Books Ireland Nov 2007 'Scholars of nineteenth-century Irish and Irish-American politics should reacquaint themselves with these classics, part of a long running and immensely useful series from University College Dublin Press. Patrick Maume has edited and written the introductions for no less than nine of the books in this series, lending them his breadth of knowledge and keen analysis that have made him one of the most learned and intellectually generous young scholars in the field.' Irish Literary Supplement Fall 2008 'this is a collection of writing by Corkman Casey which might be regarded as a memoir of his time in Australia where he was transported after the failed 1867 rising. The book is in three parts. The first consists of letters he wrote while in Australia; the second reprints a long letter of his which was serialised in the newspaper The Irishman; while the third part is Casey's notebook written between 1867 and 1868. Together they provide a vivid portrait of a convict's life in Australia. Casey returned to Ireland in 1870 after an amnesty. He did not have a high opinion of Australia or of the life that voluntary immigrants could expect there and discouraged Irish people from emigrating - [as] a source on the Fenians and the transportees it is valuable.' Books Ireland November 2010 'Two selections of his writings have been included in the Classics of Irish History series, both edited by Mairead and Patrick Maume and Mary Casey, granddaughter of John Sarsfield Casey. The first The Galtee Boy is a detailed and fascinating account of his trial before the Cork Special Commission. It also gives an insight into the organisation of the Fenians in the cuitry. It concludes with a description of life in English prisons and his struggle there to preserve dignity. In 1867 he was transported to Australia and the second book, A Mingling of Swans, tells us of life on a road gang in a penal settlement. It also includes a selection of his letters home and to other Fenians. Both books are expertly edited and the notes add greatly to the information in them. UCD Press are to be congratulated on this series in general. The standard of editing and presentation are uniformly high. The inclusion of the hitherto unpublished works on the Fenian movement makes available valuable insights which will greatly assist students of the period. One looks forward to more such publications.' Books Ireland, May 2012

John Sarsfield Casey (1846-96) was born in Mitchelstown, Co. Cork, and became involved in the Irish Republican Brotherhood while still at school. He was deported to Australia in 1867. He returned to Ireland in 1870 after an amnesty and remained active in land and nationalist agitation until his death. Casey's The Galtee Boy, an account of his Fenian activities in Cork, has also been published in the Classics of Irish History series. MAIREAD MAUME is a graduate of University College Cork and former teacher. PATRICK MAUME is a researcher with the Dictionary of Irish Biography. MARY CASEY is John Sarsfield Casey's granddaughter.

Introduction by Mary Casey, Mairead Maume and Patrick Maume; Note on the Text; A MINGLING OF SWANS: Part I: The Correspondence of John Sarsfield Casey, 1867-71; Part II: From the Irishman, 1870: 1 Emigration to Australia, 1867; 2 The Released Prisoners' Visit to the Australian Colonies, 1869; Part III: Casey's Australian Notebook, 1867-8; APPENDICES: A History of Western Australia; B The Catholic Church in Western Australia; C The Amnesty Movement; D Biographical notes on key figures: 1 Fenians; 2 Others.