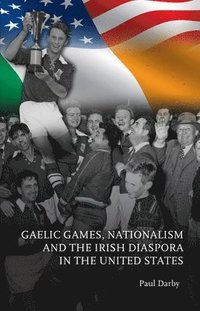 Gaelic Games, Nationalism and the Irish Diaspora in the United States

av Paul Darby
Häftad Engelska, 2009-08-24
469
Bevaka
Spara som favorit
Tillfälligt slut – klicka "Bevaka" för att få ett mejl så fort boken går att köpa igen.
Gaelic sports have been played for over a century in America, and provide a revealing window into the lives and culture of the Irish community there. Much has been written about the ways that the successes of their politicians, the efforts of the Catholic Church and the solace, identity and friendships offered by a whole range of their social, political and charitable organisations helped the Irish adapt to life in urban America. Far less has been said though about the role of sport, let alone Gaelic games, in allowing them to make sense of their new surroundings and deal with the rigours of adjusting to and progressing in the New World. "Gaelic Games, Nationalism and the Irish Diaspora in the United States" redresses this neglect by uncovering the origins and development of Gaelic sport and by exploring the political, economic and social impact that the GAA has had on Irish communities in America. New York, Boston, Chicago and San Francisco, cities that were not only focal points of Irish immigration but were also the main centres of GAA activity in the US, are taken as case studies. The book draws on detailed archival research, interviews with leading figures in the GAA in America and contains a selection of rare photographs of clubs, teams and players of significance which help to bring to life a remarkable story of cultural preservation, persistence and passion for Gaelic games.
Visa hela texten

'Overall, Darby's book is a fine contribution to the study of the emigrant experience in America and a most welcome addition to literature on the history of the GAA.' Irish Studies Review, February 2013 "[Darby] focuses on the four cities - New York, Boston, Chicago and San Francisco - to show the breadth of the Irish experience and how the GAA interacted with the wider Irish community differently in each city. The result is an enlightening study of one facet of the Irish-American experience as Darby shows not only how the GAA influenced the community and became part of the wider issues of religion, politics and identity but also how Gaelic games in the United States were influenced by circumstances there and reaction to events in Ireland, particularly the recent northern troubles." Books Ireland October 2009 "a tour de force. A brilliant work - [the author's] level of research and detail is to say the least, breathtaking." Denis O'Brien Irish Examiner October 2009 "Anyone who has ever visited New York, or indeed any of the big American cities, will probably be aware of the huge role that the GAA plays in the lives of Irish people, both those new to the Diaspora and into second, third and even more distant generations - A new book by former Antrim footballer Paul Darby, Gaelic Games, Nationalism and the Irish Diaspora in the United States, seeks to provide a detailed history of the Association there since its origins. The key theme is the way in which Gaelic Games and all that had to do with them became and remain a central identifier for Irish people and people of Irish descent but more importantly that it was the focus of much of the social, economic and political life of the Diaspora over more than a century - Darby provides a general overview of the connection between the American GAA and the republican struggle at home which was particularly important at key phases such as between 1916 and 1923, during the hunger strikes in 1981, and most lately of course during the Peace Process. He makes the point that, particularly in latter years, the GAA had often been a minority voice in highlighting what was happening in Ireland but that when major events took place the GAA was invariably at the centre of the enlarged interest of the general Irish population - Darby's book provides a comprehensive overview of the history of the GAA in the US mainly from an administrative and sociological perspective and as such is probably the best and most accurate account of the GAA there to date." Click on this link for the full review: www.anphoblacht.com/news/detail/38946 Matt Treacy - An Phoblacht October 2009 "For many of those who left Ireland in the late 19th century and beyond, the GAA has been something that they have been able to keep in their lives. In the vastly different environment of the USA, the GAA gave them a sense of the familiar and a reminder of home - In [this book Paul Darby] uncovers the origins of Gaelic games in the US in the late 19th century, accounts for their subsequent development and explores the socio-economic, political and cultural impact of the GAA in Irish-America - The book also examines the relationship between US branches of the GAA and Irish nationalism and shows that this relationship varied according to events both in America and in Ireland - The research conducted by Dr Darby details the ways in which the GAA in the US has become increasingly de-politicised in recent years. The peace process in Northern Ireland has inevitably played a huge part in this - The GAA has also had to adapt due to the downturn in immigration over the last 10-15 years, which has seen a whole host of Irish organisations in America struggle. Those who are so passionate about preserving Gaelic games are increasingly looking to young Irish-Americans as well as children without any Irish lineage to sustain these sports in the future." Click on this link for the full review: www.inside

Paul Darby is a Senior Lecturer in the School of Sports Studies at the University of Ulster (Jordanstown). He is author of Africa, Football and FIFA: Politics, Colonialism and Resistance and joint editor of Emigrant Players: Sport and the Irish Diaspora (with David Hassan) and Soccer and Disaster: International Perspectives (with Gavin Mellor and Martin Johnes). He sits on the editorial board of the international journal, Soccer and Society and the advisory board of Impumelelo: The Interdisciplinary Electronic Journal of African Sport. He has written numerous scholarly articles dealing with the relationship between sport and society in a range of contexts.

Introduction; ONE: Crossing the bowl of tears: the Irish journey to America; TWO: Sowing the seeds: the origins and early development of Gaelic games in America; THREE: Patriots and players: the GAA and Irish nationalism in late nineteenth-century America; FOUR: Preserving Ireland's sporting heritage: Gaelic games in the US from the turn of the century to the Great War; FIVE: Fluctuating fortunes: the GAA in America from the roaring twenties through the Great Depression; SIX: Revival, 'Golden Age' and decline: Gaelic games in post-war America; SEVEN: Lest we forget: Gaelic games and Irish-American nationalism, 1900-68; EIGHT: Striving to survive: The North American County Board in the late twentieth century; NINE: Ourselves alone: The New York GAA since 1970; TEN: The GAA, Northern Ireland's 'Troubles' and Irish-American identity politics; Conclusion; Notes; Bibliography; Index.