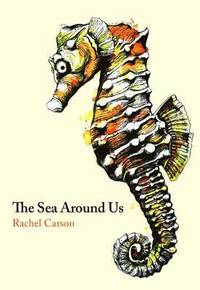 The Sea Around Us

av Rachel Carson
Häftad Engelska, 2014-04-29
219
Köp
Spara som favorit
Skickas inom 3-6 vardagar.
Fri frakt inom Sverige för privatpersoner.
Finns även som
Visa alla 2 format & utgåvor
Rachel Carson's classic trilogy comprises three volumes - The Sea Around Us (1950), Under the Wind-Sea (1941) and The Edge of the Sea (1955). The Sea Around Us presents an overview of the subject, a natural history of the oceans in which Rachel Carson discusses such matters as their origins, the evolution of life, the creation of volcanic islands
Visa hela texten

Bloggat om The Sea Around Us

Rachel Louise Carson (1907 - 1964) was an American marine biologist and conservationist whose book Silent Spring and other writings are credited with advancing the global environmental movement. Carson began her career as an aquatic biologist and became a full-time nature writer in the 1950s. She highlighted conservation, especially environmental problems that she believed were caused by synthetic pesticides, most notably DDT. She brought environmental concerns to a global audience through her writing, inspiring grassroots environmental movements across the planet.