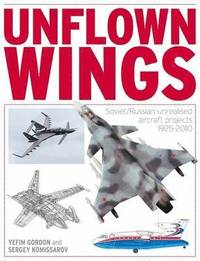 av Gordon Yefim, Sergey Komissarov
Inbunden Engelska, 2013-06-06
489
Köp
Spara som favorit
This book surveys all the Soviet/Russian aircraft that either remained 'paper projects' (the work progressed no further than the design documents or even merely a design proposal) or were abandoned at the prototype construction stage. Over many years the authors have unearthed a mass of unpublished material on these aircraft projects. These include such aircraft as the Isayev/Shevchenko 'bi-monoplane' fighters with retractable lower wings developed in the 1930s, early Soviet jet fighter projects of the Second World War period, the twin-boom fighters and attack aircraft developed by Semyon M. Alekseyev in the late 1940s, Aleksandr S. Yakovlev's high-altitude 'balloon killer' fighters developed in the mid-1950s specifically for use against NATO reconnaissance balloons, the jet fighters of the Antonov design bureau which specialised primarily in transports and airliners, the various unbuilt fighter and bomber projects of Artyom I. Mikoyan, Pavel O. Sukhoi, Vladimir M. Myasishchev and Roberto Bartini. Wherever possible images of the aircraft are shown, including pictures of models, line and cutaway drawings from the project documents, giving the readers the maximum available information on Soviet aircraft projects developed over a large time scale. The book is richly illustrated with numerous photos, drawings and diagrams, as well as colour side views of the unbuilt aircraft, which will be of interest not only to the numerous Soviet/Russian aviation enthusiasts but also to scale modellers.
Visa hela texten

Yefim Gordon was born in 1950 in Vilnius, Lithuania, and graduated from the Kaunas Polytechnical Institute in 1972 as an engineer/electronics designer. He has been a resident of Moscow since 1973, when, as a hobby, he started collecting photographs and books on the history of Soviet aviation. This has now developed into a major archive. Since the 1980s he has been a professional aviation journalist and writer, with over 80 books published on Soviet/Russian aviation in Russian, English, Polish and Czech, as well as close to 120 magazine features and photo reports. He is also an accomplished photographer, with countless photos published in the western press; the current edition of Jane's All the World's Aircraft features more than 50 of his photographs.