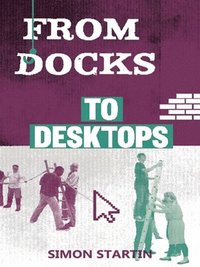 From Docks to Desktops

av Simon Startin
Häftad Engelska, 2014-01-06
299
Köp
Spara som favorit
Skickas inom 5-8 vardagar.
Fri frakt inom Sverige för privatpersoner.
Created from dozens of personal testimonies, this is the story of the changing face of work today. This unique approach to exploring a key social trend gives a human voice to the workplace revolution. Surrey Docks in South-East London was once a thriving commercial hub, hosting some of the UK's leading commercial brands, including Crosse & Blackwell, Sarson's, Peek Freans and Lipton's. These huge organisations created a myriad of jobs for local people, and the community prospered. But, with the decline of the docks in the 1970s, factories closed down or relocated, work patterns changed and redevelopment began. From Docks to Desktops explores the fascinating story of how one community has survived the 21st-century challenges of urban change and renewal.
Visa hela texten

Bloggat om From Docks to Desktops

Simon Startin Simon Startin has worked as a professional theatremaker since 1991. Initially as an actor, working with such companies as Graeae, Royal Exchange Manchester, Hampstead Theatre, Red Shift and Fittings, as well as roles on film and television. In 2002 he branched into writing through the Paines Plough "Wild Lunch" scheme. The resulting play Revolting was funded by London Arts and premiered at the Xposure Festival, a dark satire on models of disability telling the story of "Happenstance" - the cripple Christ never cured. Since then he has struck up a fruitful relationship with London Bubble Theatre Company, writing nine pieces for them, five of which were awarded the Time Out Critics' Choice. His other plays include: The Crock of Gold, Myths, Rituals and Whitegoods, Metamorphoses, Odyssey, Mezzanine and Sirens of Titan. Currently, Simon is Co-creative Director of the The Big Lounge Collective, a production company that promotes the work of emerging disabled artists. His play Blackbirds, produced by London Bubble, is also published by Aurora Metro Books.