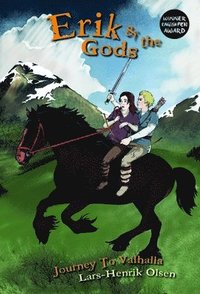 Erik and the Gods: Journey to Valhalla

av Lars-Henrik Olsen
Häftad Engelska, 2017-07-19
130
Köp
Spara som favorit
The Gods have been fighting a never-ending war with the Giants and their strength is failing. One evening, during a terrible storm, Thor, the God of Thunder, appears to Erik, an ordinary boy. He sends Erik on a secret mission with his daughter, Trud, to travel to the Land of the Dead. Erik must bring back the Goddess of Eternal Life and her magic apples before the Gods weaken and totally lose their powers. Time is running out. Can Erik rescue the Goddess from the Giants and prevent the end of the world?
Visa hela texten

"Famous myths and legends burst into life again when 13-year-old Erik is enlisted to help out the Norse gods, now fallen on hard times. His adventures that follow are in the same epic league as Tolkien's The Lord of the Rings, but delivered with a lighter touch as Erik brings in his own modern perspective to all he sees and hears now going on around him. Packing each chapter with incident and extraordinary detail concerning everyday life in Valhalla, the ancient home of the gods, Lars-Henrik Olsen provides readers of all ages with an unfailingly good-humoured feast for the imagination. Published thirty years ago in Danish, this wonderfully entertaining story, the first of four involving Erik, richly deserves a wider audience today." - Nicholas Tucker, Rough Guide to Children's Books; "Lars-Henrik Olsen's epic novel of Erik's adventures with the Viking gods is a main reason why the powerful tales of Norse mythology continue to be shared by generations of Danes. When, as a young teenager, I first encountered Erik and the Gods, I discovered what would become a lifelong passion for fantasy and, not least, reading." - Jakob Stougaard-Nielsen, UCL Scandinavian Studies; "When the great hammer wielding Thor whisks Erik off to Asgard, the boy finds himself in a new (and very ancient) world preparing to embark on a perilous quest. It will be an action-packed journey on a mythological scale, with Gods and giants, with monsters and magical knives, with dragons and wolves and serpents, with treachery and heroism. Olsen's breathless new adventure is filled with the old stories, which it conjures back into life - an exciting and original introduction to one of the greatest of all mythological universes." - Daniel Hahn, Oxford Companion to Children's Literature; "The vivid imagination present in Lars-Henrik Olsen's retelling [of the Nordic myths] makes it an obvious choice for bedtime reading. Odin's loneliness, the death of Balder and the warnings about Ragnarok are world-class literature."- Jyllandsposten; "The first part of the novel is an incredibly lively and exciting introduction to the wealth of the Nordic myths. The second part leads the main characters on a journey to Hel, the Kingdom of the Dead, to Jotunheim, the land of the giants and on to the castle of Utgard-Loki. The story will make you shudder and shiver like in the most hard-boiled crime novels while demonstrating the strengths and qualities of the two main characters as in the classic coming-of-age novel. For children of the current generation, [it's] the perfect induction to the Nordic myths and legends." - Niels Mors, Information

Lars-Henrik Olsen (born 30 July 1946) is a Danish author. His oeuvre spans both children's and youth and adult books. He has written books about animals and nature, Nordic mythology and several historical novels. Among his more notable books are the Erik series. His books have been translated into a total of 13 different languages. In 1976 he published several nature books including Life in the sea: a food chain and Life in the forest: a circuit. His debut fiction novel was Wolves and then followed a series of books with animals and nature as a theme. In 1986 he was awarded The Danish Bookstores Auxiliary Society of Children's Book Prize for Erik Menneskeson. In 1988 this was followed by The dwarf from Normandy which won Denmark's school librarian Society of Children's Book Prize. Since then he has written a wealth of children's and youth books, many of which are inspired by the Vikings, Norse mythology and medieval times.