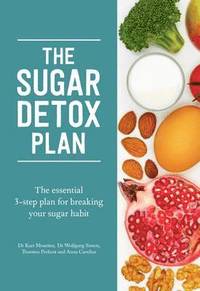 The essential 3-step plan for breaking your sugar habit

av Kurt Mosetter, Wolfgang Simon, Thorsten Probost, Anna Cavelius
Inbunden Engelska, 2016-03-10
199
Köp
Spara som favorit
Skickas inom 7-10 vardagar.
Gratis frakt inom Sverige över 159 kr för privatpersoner.
Excessive consumption of sugar can lead to a range of diseases, such as type-2 diabetes, cancer, depression and even neurodegenerative conditions such as Alzheimer's and multiple sclerosis. Through a motivational 3-step programme The Sugar Detox Plan helps you identify hidden sugars and reduce consumption. *Step 1 - get informed about the dangers of sugar and monitor your current sugar intake.*Step 2 - how to break the addiction and reduce intake including information about alternative sugars with over 35 sugar-free recipes to get you started.*Step 3 - how to stay on track and maintain consistent sugar levels with the inclusion of a regular exercise programme.
Visa hela texten

Dr. Kurt Mosetter is a physician and medical practitioner. He studied Medicine at the Albert-Ludwigs-University in Freiburg, specialising in the physics of the neuromuscular system in musculoskeletal pain. He is the founder of Myoreflextherapy (www.myoreflex.de) and since 2011 has been the doctor for the American football team. Michelin star and 2008 Chef of the Year, Thorsten Probost focuses his recipes on the natural taste of fresh foods. He began his career in Staufeneck Rolf Straubinger restaurant in Salach, and has cooked all styles of foods, from traditional to nouvelle cuisine, in restaurants from Prielau Castle to Burg Vital Resort in Arlberg. Since 2009 he has been President of the Association of Young Restauranteurs in Austria. Dr. Wolfgang Alexander Simon studied Biochemistry in Tubingen, Chemistry at the TechnicalUniversity of Berlin and has a doctorate from the University of Konstanz . He worked for many years in biochemical research in Konstanz, with periods of research at UCLA and in Guildford, England. Anna Cavelius has an MA in Philosophy and has worked as a freelance science writer and ghostwriter since 1995. She has co-authored several books on topics including cancer prevention, hormones, and weight loss.