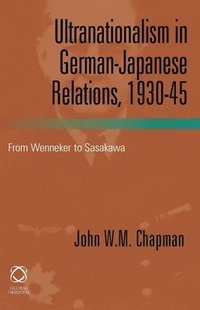 From Wenneker to Sasakawa

av John W M Chapman
Inbunden Engelska, 2011-02-01
1069
Köp
Spara som favorit
Skickas inom 10-15 vardagar.
Fri frakt inom Sverige för privatpersoner.
This important new study focusing on the ultranationalist regimes in Germany and Japan during the 1930s and 1940s examines in biographical format the roles played by individuals significantly involved in the drive for global hegemony. Employing a considerable range of new source materials and eyewitness testimony on the German side, it highlights the roles of the Nazi Party 'enforcer' and Gestapo representative in East Asia, Josef Albert Meisinger, and of the officer commanding German naval forces in the Pacific region, Admiral Paul Werner Wenneker, agent Richard Sorge as whose relations with the Japanese Navy in the 1930s were observed and recalled by Engineer-Commander George C. Ross, the UK assistant naval attache in Japan. The reactions of the German aero-engineer, Willi Foerster, a client of the Soviet radio operator, Max Clausen, to both Meisinger and Wenneker in the 1940s are also documented. On the Japanese side, new evidence is employed which examines the influence of the right-wing business and political figure, Sasagawa Ryoichi, on domestic events during the era of 'Tenno-fascism' and its aftermath. Similarly, an analysis of the role of the head of wartime Japanese military intelligence in eastern Europe, General Onodera Makoto, based in Stockholm, indicates the extent of opposition within the Japanese army to factional groups wedded to Nazi ideology and strategy and the ongoing support in Japan for anti-Soviet and anti-communist policies in the post-war era.
Visa hela texten