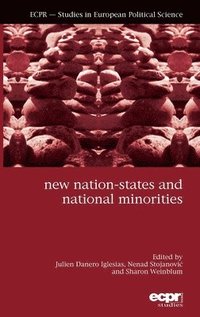 av Julien Danero Iglesias, Nenad Stojanovic, Sharon Weinblum
Inbunden Engelska, 2013-03-01
899
Köp
Spara som favorit
Finns även som
Visa alla 1 format & utgåvor
The twentieth century saw the emergence of new states shaped on the classic nation-state model. How has this model been moulded and implemented? What have been the implications for minorities in these new nation-states? And how have minorities responded to nationalising processes? Following a discussion by Rogers Brubaker of his concept of nationalising state, contributions to this volume examine the dynamic relations between national minorities and nation-states established in the course of the last century, including Ukraine, Moldova, Turkey, Malaysia and Israel. This book's original theoretical framework and comparative approach offer a new understanding of the complex interactions between the formulation of a state identity and the aspirations of those who do not fit in the proclaimed core nation. In light of recent developments in - notably - Ukraine and Israel, this book is essential reading for all those interested in the rights and protection of national minorities and, more broadly, in the debates over the definition of the polity in a tense environment.
Visa hela texten

A group of young scholars, under the intellectual patronage of Rogers Brubaker, has undertaken the challenging task of disentangling the complex relationships between newly nationalising states and their national minorities, mainly in Eastern and Central Europe, but also beyond (Malaysia, Israel, Turkey - ). The result is a well researched book, theoretically informed, which sheds refreshing light on state-building processes, minorities' mobilisation and inter-group relations Alain Dieckhoff, Professor at Sciences Po Paris

Julien Danero Iglesias (PhD in Political Science, Universite libre de Bruxelles) is a Postdoctoral Researcher in Political Science at the Universite libre de Bruxelles, Belgium. He has interests in nationalism and minority studies, with a focus on Central and Eastern Europe. His current work focuses on nationalism in the Republic of Moldova and on Romanian minorities outside of the European Union. He recently published in Nationalities Papers, Mots and Revues d'Etudes comparatives Est-Ouest. Nenad Stojanovic (PhD in Political Science, Zurich) is a Senior Research Fellow at the Centre for Democracy Studies in Aarau (ZDA), Switzerland, and an Assistant Lecturer at the universities of Zurich, Lausanne and Geneva. He has research interests in comparative politics, political theory and Swiss politics, with a focus on prospects for democracy in multicultural societies. His current work is on challenges of direct democracy in multilingual societies. Recent publications have appeared in Representation, Politique et Societes, Transitions, Ratio Juris, and Nations and Nationalism. Sharon Weinblum (PhD in Social and Political Sciences, Universite libre de Bruxelles) is a postdoctoral fellow at the University of Oxford. Her work focuses on different aspects of Israeli democracy, including the tension between security and democracy, and the status of non-Jewish populations in the country. Her work has been published or is forthcoming in, among others, Politique et Societes, Perspectives on European Politics and Society and Constellations.