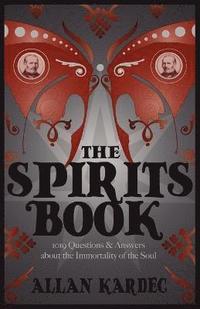 1019 Questions & Answers About the Immortality of the Soul

av Allan Kardec
Häftad Engelska, 2010-05-01
199
Köp
Spara som favorit
Skickas inom 10-15 vardagar.
Fri frakt inom Sverige för privatpersoner.
'The Spirits Book' (1857), written by Allan Kardec, is widely regarded as the most important piece of writing in the 'Spiritist' canon. It is the first in a series of five books that Kardec wrote that are collectively known as the 'Spiritist Codification'. Although the other four books; 'The Medium's Book', 'The Gospel According to Spiritism', 'Heaven and Hell' and 'The Genesis According to Spiritism' are of great importance to the Spiritist movement it is 'The Spirits Book' that lays out the doctrine of the belief system. The Spiritist movement was founded by Allen Kardec and although its roots lay in Spiritualism there are differences in belief. The most important of these differences is the Spiritist belief in reincarnation. Although some Spiritualists believe in reincarnation and some do not, all Spiritists consider it as a basic truth of their ideology. In the 1850's, whilst investigating the afterlife, Kardec communicated in seances with a collection of spirits named 'The Spirit of Truth' who discussed many important topics such as life after death, good and evil, the universe and the origin of spirits, amongst others. 'The Spirit of Truth' counted many of history's great thinkers amongst its number such as Thomas of Aquino, Voltaire and Augustine of Hippo. Over time and after several sessions with the group Kardec had gathered enough information to convince him of life after death and he was compelled to spread the teachings of 'The Spirit of Truth'. He 'codified' their comments and listed them as answers to questions and this is the content of 'The Spirits Book'. The subjects that Kardec discusses, via 'The Spirit of Truth', laid down the foundations for the Spiritist philosophy and all of the concepts that would become, and still are, key to the movement's thinking have their genesis in the book. The belief that there is one Supreme Being, God, who created everything in the universe, is postulated. According to the text the Devil does not exist and Jesus is a messenger of God. Although the book does not refer to Jesus as the son of God and no mention is made of the 'immaculate conception' he is considered God's perfect messenger and his teachings are to be adhered to. Reincarnation and the survival of the soul after death are vital beliefs and it is stated that it is through reincarnation that lessons are learnt that can be taken into the next life and that every life moves the soul closer to perfection. According to the book man is made up of three separate elements; the body, the spirit and the spiritual body. One's spirit also predates the matter of the universe and will outlast it. After the publication of 'The Spirits Book' Kardec's Spiritist doctrine began to take root, firstly in France from where it spread throughout Europe and found its way to North America. Most significant, however, was the reaction to Spiritism in South America. In Brazil the Spiritist movement swept across the nation and it is still one of the country's main religions to this day with millions of Kardec's followers from Brazil visiting his tombstone in Paris every year.
Visa hela texten

The figure-head of the Spiritist movement, Allan Kardec, was born Hippolyte Leon Denizard Rivail on October 3rd, 1804, in Lyon, France. He came from a long line of lawyers and legal professionals and was expected to follow suit but broke with family tradition to explore his interests in philosophy and the sciences. Hippolyte finished his studies in Switzerland where he became an acolyte and colleague of the famed educational maverick Johann Heinrich Pestalozzi. By the time he had finished his education Rivail had quite a collection of qualifications and skills such as Bachelor of the Arts degrees in science and letters and a doctorate in medicine. He was also fluent in Spanish, German, Italian and English and all of the talents and honours he had acquired made him an ideal collaborator for Pestalozzi. Hippolyte's work with Pestalozzi helped to lay the foundations for the teaching model in schools in France and Germany. He was a member of many scientific societies and wrote extensively on various subjects and one of his papers, 'Which System of Study Is Most Harmonious with the Needs of the Time?', lead to his induction in the Royal Academy of Arras. Rivail's interests in science expanded beyond conventional studies and by the early 1850's he had taken an interest in Franz Mesmer's theory of 'animal magnetism'. Mesmer's theory was all the rage in the upper reaches of society and so was the phenomenon of 'spirit tapping'. Spirit tapping had become very popular in France and the USA and it involved the apparent unaided movement of objects by spirit forces to answer questions by tapping out noises on surfaces with the amount of knocks translating to numbers of the alphabet. Such widespread fascination in the incidents piqued the interest of Rivail and so he decided to investigate the strange goings on. He attended his first seance in the May of 1855 and recorded his thoughts on this initial exposure to the phenomenon: These meetings provided me with my first opportunity for serious studies of the subject that later led to the Spiritist Doctrine-study filled less with revelation and more with systematic observation. As to any new subject, I applied rigorous method to the investigation: avoiding preconceived notions, I observed attentively, compared observations, and deduced the consequences. I tried to identify the causes of the phenomena by linking the facts logically, and I did not accept an explanation as valid unless it could resolve all the difficulties of the question. This was the way I had always, from the age of fifteen or sixteen, proceeded in my scientific investigations. I understood from the beginning the gravity of the exploration I was undertaking. I foresaw in those phenomena, the key to the solution of problems so obscure and so disputed, both in the past and in the future, which I had searched for all my life; the phenomena posed a complete revolution in ideas and beliefs. It was necessary, therefore, to act not lightly, but rather with circumspection, to be positive rather than idealistic, so as not to be carried away by illusions.A" During the many seances he attended Kardec communicated with a collection of entities that called themselves 'The Spirit of Truth'. The group talked about many lofty subjects such as life after death, good and evil, the universe and the origin of spirits, amongst others. Thomas of Aquino, Voltaire and Augustine of Hippo all came through in the sessions and after a number of seances with the group Revail decided there was enough proof to convince him that there was life after death. Sensing that his revelation wasn't meant just for him he decided to spread the message and 'codified' the Spirit of Truth's teachings and listed them as answers to questions. The resulting text made up his first book on the topic, 'The Spirits Book', and the book was published under the pseudonym of Allan Kardec. Sources vary on why he chose the name with some suggesting it was an old B

Contents Preface to the revised edition 12 Introduction 13 Prolegomena 56 Book 1: Causes 60 Chapter 1: God 62 God and Infinity 62 Proofs of the Existence of God 62 Attributes of the Divinity 64 Pantheism 66 Chapter 2: General Elements of the Universe 69 Knowledge of the First Principles of Things 69 Spirit and Matter 70 Properties of Matter 73 Universal Space 75 Chapter 3: Creation 77 Formation of Worlds 77 Production of Living Beings 78 Peopling of the Earth - Adam 81 Diversity of Human Races 81 Plurality of Worlds 82 The Biblical Account of the Creation 84 Chapter 4: The Vital Principle 89 Organic and Inorganic Beings 89 Life and Death 91 Intelligence and Instinct 93 Book 2: The Spirit World, or World of Spirits 97 Chapter 1: Spirits 98 Origin and Nature of Spirits 98 Primitive and Normal World 100 Form and Ubiquity of Spirits 101 Perispirit 103 Different Orders of Spirits 104 Spirit - Hierarchy 104 Third Order - Imperfect Spirits 108 Second Order - Good Spirits 111 First Order - Pure Spirits 113 Progression of Spirits 114 Angels and Demons 118 Chapter 2: Incarnation of Spirits 123 Aim of Incarnation 123 The Soul 124 Materialism 129 Chapter 3: Return from Corporeal to the Spirit Life 134 The Soul after Death 134 Separation of Soul and Body 136 Temporarily Confused State of the Soul after Death 140 Chapter 4: Plurality of Existences 143 Reincarnation 143 Justice of Reincarnation 144 Incarnation in Different Worlds 146 Progressive Transmigrations 153 Fate of Children after Death 157 Sex in Spirits 159 Relationship - Filiation 160 Physical and Moral Likeness 161 Innate Ideas 165 Chapter 5: Considerations on the Plurality of Existences 168 Chapter 6: Spirit Life 180 Errant or Wandering Spirits 180 Transitional Worlds 184 Perceptions, Sensations, and Suffering of Spirits 186 Theoretic Explanation of the Nature of Sensation in Spirits 192 Choice of Trials 198 Relationships Beyond the Grave 207 Sympathies and Antipathies of Spirits - Eternal Halves 212 Remembrance of Corporeal Existence 215 Commemoration of the Dead - Funerals 220 Chapter 7: Return to Corporeal Life 224 Preludes to Return 224 Union of Soul and Body - Abortion 228 Moral and Intellectual Faculties 232 Influence of Organism 234 Idiocy - Madness 236 Infancy 240 Terrestrial Sympathies and Antipathies 243 Forgetfulness of the Past 245 Chapter 8: Emancipation of the Soul 252 Sleep and Dreams 252 Visits Between the Spirits of Living Persons 259 Occult Transmission of Thought 261 Somnambulism 263 Trance 268 Second Sight 270 Explanation of Somnambulism, Trance, and Second Sight 272 Chapter 9: Interventions of Spirits in the Corporeal World 279 Penetrations of our Thoughts by Spirits 279 Occult Influence of Spirits on our Thoughts and Actions 280 Possession 284 Convulsionaries 287 Affection of Certain Spirits for Certain Persons 288 Guardian-Angels - Protecting, Familiar, and Sympathetic Spirits 290 Presentiments 302 Influence of Spirits on the Events of Human Life 303 Spirits During a Battle 310 Pacts With Spirits 313 Occult Power - Talismans - Sorcerers 314 Benedictions and Curses 316 Chapter 10: Occupations and Missions of Spirits 317 Chapter 11: The Three Reigns 327 Minerals and Plants 327 Animals and Men 329 Metempsychosis 337 BOOK 3: Moral Laws 343 Chapter 1: Divine or Natural Law 344 Characteristics of Natural Law 344 Knowledge of Natural Law 345 Good and Evil 349 Division of Natural Law 354 Chapter 2: The Law of Adoration 355 Aim of Adoration 355 External Acts of Adoration 356 Life of Contemplation 357 Prayer 358 Polytheism 362 Sacrifices 363 Chapter 3: The Law of Labour 367 Necessity of Labour 367 Limit of Labour - Rest 369 Chapter 4: The Law of Reproduction 371 Population of the Globe 371 Succession and Improvement of Races 371 Obstacles to Reproduction 373 Marriage and Celibacy 373 Polygamy 375 Chapter 5: The Law of Preservation 377 Instinct of Self-Preservation 377 Means of Self-Preservation 377 Enjoyment of the Fruits of the Earth 381 Necessaries and Superfluitie