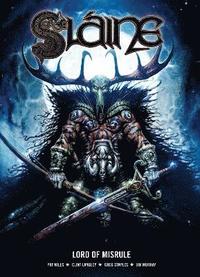 av Pat Mills
Häftad Engelska, 2011-04-14
189
Köp
Spara som favorit
Skickas inom 3-6 vardagar.
Fri frakt inom Sverige för privatpersoner.
Sent on a quest by the earth goddess to destroy the blood god, Slaine has now been reborn in the time of the Normans as Robin Goodfellow, King of the Greenwood. But first he has to seek out his beloved Niamh (herself reborn as a Christian nun called Marian), so together they can learn the secret name of the beast which will allow Slaine to destroy it as the Lord of Misrule!This epic saga of Slaine by writer Pat Mills (Nemesis the Warlock, Flesh) includes artwork digitally updated exclusively for this volume by Clint Langley (A.B.C. Warriors, Ghost Rider) as well as the stunning fully painted art of Greg Staples (Judge Dredd) and Jim Murray (World of Warcraft, Batman/Judge Dredd: Die Laughing).
Visa hela texten

Pat Mills is the creator and first editor of 2000 AD. For the Galaxy's Greatest Comic, he is the writer and co-creator of ABC Warriors, Finn, Flesh, Nemesis the Warlock, Slaine, M.A.C.H 1, Harlem Heroes and Savage. Outside 2000 AD he is the writer and co-creator of the long-running classic anti-war story Charley's War, as well as Marshal Law. He has also written for the Batman, Star Wars and Zombie World series for the US market. Currently Mills is writing the best-selling series Requiem -- Vampire Knight for Editions Nickel of France with artist Olivier Ledroit, and a spin-off series, Claudia -- Vampire Knight, with artist Frank Tacito. Two further French series are in production.