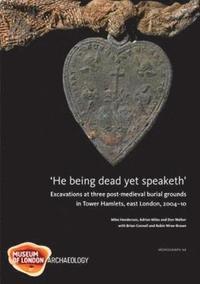 'He being dead yet speaketh'

av Robin Brown, Brian Connell, Michael Henderson, Adrian Miles, Don Walker
Inbunden Engelska, 2012-11-30
329
Köp
Spara som favorit
Skickas inom 10-15 vardagar.
Fri frakt inom Sverige för privatpersoner.
The latest in a series on post-medieval burial produced by MOLA, this volume reports on three non-Church of England burial grounds in the London Borough of Tower Hamlets, excavated between 2004 and 2010. It looks at over 1350 burials of Baptists, Roman Catholics and Nonconformists, the majority of whom died in 1820-54, and examines the archaeological and osteological evidence, along with the historical and documentary sources. The discussions aim to place the three populations within the wider context of 19th-century London and Britain, with the findings well illustrated and fully tabulated throughout.
Visa hela texten

Bloggat om 'He being dead yet speaketh'

Robin Brown has published 14 books across a range of genres - natural history, biography, fiction and history - mostly with African themes. He also created, produced, directed and wrote Nature Watch, ITV's most successful natural history series, consisting of 68 programmes, all in the British top 20. He has produced some 50 specials for the BBC, National Geographic and Discovery, including ManEaters of Tsavo (with David Attenborough) and the award-winning In the Company of Whales. His first novel, When the Woods became the Trees, was nominated for a Pulitzer Prize, and his book Marco Polo: The Incredible Journey has been sold to five countries and is presently the primer on the subject in Brazilian schools. Robin is an experienced speaker and a Fellow of the Royal Geographical Society, where he lectures regularly on books and films with conservation themes.