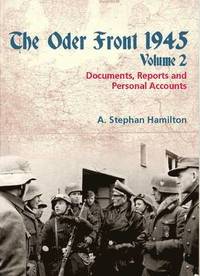 av A Stephan Hamilton
Inbunden Engelska, 2014-12-15
639
Bevaka
Spara som favorit
Tillfälligt slut – klicka "Bevaka" för att få ett mejl så fort boken går att köpa igen.
Finns även som
Visa alla 1 format & utgåvor
Heeresgruppe Weichsel, or Vistula, was created on the order of Adolf Hitler in part to "organise the national defence on German soil." Relying on primary documents from Heeresgruppe Weichsel and Oberkommando des Heeres that are reprinted in their entirety along with summary translations, this new volume examines why the command came into existence, what was its priority compared to that of other commands in the East, and how that translated into men and material support for its combat divisions. Volume 2 is divided into four parts."Part I: Formation and Operations of the Heeresgruppe, 21 January-15 April" reviews the formation of the Heeresgruppe, its importance in the East, who made up the initial command staff under Himmler, and examines the planning of its key military operations. "Part II: Units, Strength, and Supply, 8 February-15 April 1945" looks at the overall manpower and Panzer levels of the Heeresgruppe and details the combat readiness of the majority of its combat divisions using available strength reports and divisional Gliederung. "Part III: Ostfront Operations: Fuhrervortrag, 25 March-21 April" presents the OKH guidance issued to the various Eastern Front commands based on Hitler's daily conferences. Heeresgruppe Weichsel's role and priority along the Eastern Front is placed in context from the time Heinrici took command through the Soviet breakthrough marking the end of the Oder Front's defensive operations and the start of the battle of Berlin. "Part IV: Final Battle of the 3.Panzer Armee, March-May 1945" covers the final operations of the 3.Panzer Armee from the perspective of its three senior officers using the previously unpublished wartime diary of General der Infanterie Martin Gareis and the postwar interviews of Generaloberst Hasso-Eccard Freiherr von Manteuffel, and Generalmajor Burkhart Mueller-Hillebrand.
Visa hela texten

The amount of work that has gone into preparing this book for publication is awe-inspiring and jaw dropping. For committed military history enthusiasts... * Books Monthly 30/01/2015 *