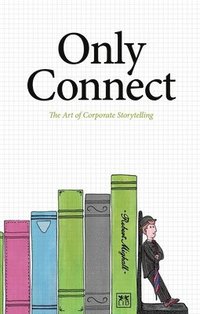 The Art of Corporate Storytelling

av Robert Mighall
Häftad Engelska, 2013-11-18
149
Köp
Spara som favorit
A coherent story can make you better understood, believed in and trusted. So why is the business world only just discovering its power? There is not a culture on this earth that does not tell, exchange and enjoy stories. Story is simply effective communication, allowing humans to connect with one another about the things that matter. Former Oxford fellow in English Literature turned brand consultant, Robert Mighall, draws on the psychology, history and creative practice of storytelling to show how modern businesses can exploit its ancient power to move us. What the corporate world needs most, story does best: establish the human connections upon which trust is built. This book explains how.
Visa hela texten

Robert Mighall is a former fellow in English Literature at Merton College in Oxford, and former editor of the Penguin Classics series. He is now a consultant in branding and corporate storytelling for communications business Radley Yeldar in London. He has worked for the likes of GSK, Shell, Lloyds Banking Group, the NHS, Anglo American and Pearson. He has published on Victorian literature, John Keats, Oscar Wilde and Shakespeare, and he is the author of a cultural history of sunshine. Only Connect brings these two worlds together.

1.Why Story 2.What Makes a Story 3.How to Develop Your Story 4.Where to Tell Your Story 5.Where Story is Going