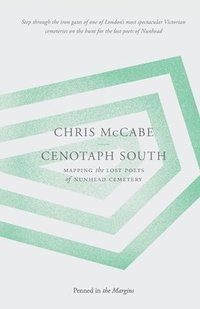 av Chris McCabe
Häftad Engelska, 2017-09-22
139
Köp
Spara som favorit
Finns även som
Visa alla 1 format & utgåvor
Step through the iron gates of one of London's most spectacular Victorian cemeteries on the hunt for the lost poets of Nunhead.Literary investigator Chris McCabe pushes back the tangled ivy and hacks his way through the poetic history of south-east London, revealing a map of intense artistic activity with Nunhead at its heart: from Barry MacSweeney in Dulwich to Robert Browning and William Blake in Peckham.Join McCabe on a journey back in time along underground rivers, through Elizabethan villages and urban woodland. Discover the surprising lives and lines of writers neglected amongst the moss-covered monuments of Nunhead Cemetery: from the 'Laureate of the Babies' and a New Zealander soldier-poet to those who chronicled London at the height of her industrial powers.But this is also a personal journey that highlights poetry's force in overcoming trauma; McCabe's exploration of Nunhead Cemetery is interwoven with diary entries that document his mother's illness.In this latest instalment in an ambitious project to plot the dead poets of the Magnificent Seven - London's great Victorian cemeteries - McCabe drills deep into the psyche of the city, and into his own past.Encounters with the dead and forgotten are charted in sinuous prose and with a wry humour that belies his meticulous research. Cenotaph South offers a powerful meditation on art, writing, memory and community, confirming McCabe as contemporary poetry's most innovative thinker. This is essential reading for anyone who has ever wondered what lies behind the canon, or beyond the cemetery gates.
Visa hela texten

Chris McCabe was born in Liverpool in 1977. His most recent poetry collection is Speculatrix (Penned in the Margins, 2014), which followed three previous books The Hutton Inquiry, Zeppelins and THE RESTRUCTURE. In 2014 he was shortlisted for the Ted Hughes Award for New Work in Poetry. His creative non-fiction book In the Catacombs: A Summer Among the Dead Poets of West Norwood Cemetery was published in 2014. His work has been described by The Guardian as 'an impressively inventive survey of English in the early 21st century.' He works as the Poetry Librarian at the Poetry Library and teaches for the Poetry School